THE ART OF POCHOIR 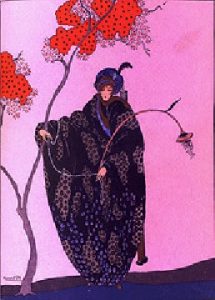 Many of us may have tried stenciling as a way of decorating our home. This technique has been in use for centuries going back to cave paintings in prehistoric Europe and in images found in China along the Asian silk route.  In Paris, during the early part of the 20th century, stenciling (known as pochoir in French)  was used in some limited-edition magazines and books associated with interior design and haute couture fashion. The library is lucky to own examples of these works.  The vivid colors and elaborate designs reflect the “Belle Epoque,” a time when Paris was viewed as the center of the fashion world.

La Guirlande : album mensuel d’art et de literature was published in Paris in 1919-1920.  It is one of the rarest examples of these Art Deco magazines and includes pochoir plates by artists of the day such as Umberto Brunelleschi, Jean Hermanovitz, and George Barbie

Insectes and Papillons; vingt planches en phototypie colories au patron donnant 81 papillons et 16 compositions decoratives, by Emile Alain Seguy, published in the mid-1920’s in Paris. Seguy describes the prints as “un monde somptueux de formes et de couleurs” — a world of
sumptuous forms and colors.  He intended the prints to be a record of rare insects and butterflies but also for the colors and forms to be an inspiration for designers of the day. 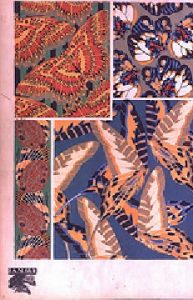 As a stimulus for their own creativity, designers of fabrics, wallpaper, ceramics, posters, and advertisements used books such as Kaleidoscope : ornements abstraits : quatre-vingt-sept motifs en vingt planches, published in the 1920s by Adam and Maurice Verneuil, with pochoirs by J. Saude.

The books above and others dealing with pochoir can all be viewed in the Special Collections Department of the Cleveland Public Library. Please call ahead at 216-623-2818 or email special.collections@cpl.org.