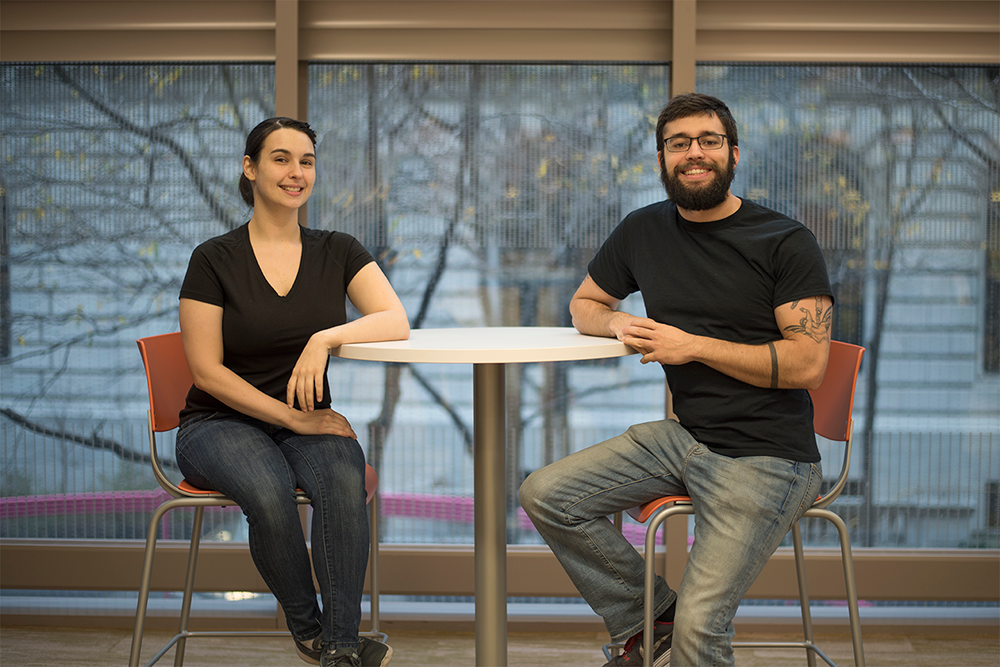 As a child growing up in Cleveland, Cella Borgia played video games to bond with her father. In the process, she discovered a love of gaming that persisted into adulthood. Gaming as an adult, however, was a different experience. Gone were the days of gathering with childhood friends to play in the same room—adult gamers, by comparison, were relatively isolated. That’s why Cella and her partner, Keven Barrera, decided to start an organization that could help bring video game enthusiasts together.

“It’s a dream every gamer has had: a place we could all play together,” Cella explains. “The human connection is so important, and nothing beats side-by-side competition. That’s why we founded Outer Haven, and also why we became involved with Cleveland Public Library’s eSports events.”

Through Outer Haven, Cella and Keven envision opening a subscription-based gaming lounge to give gamers a safe, comfortable place to play. In the meantime, they stress that Cleveland Public Library’s outreach related to eSports—including a series of free, public eSports events launched in 2017—has made all the difference not only in their own entrepreneurial goals, but in the larger Cleveland gaming community.

“I can’t thank the Library enough for the time, the help, and the equipment provided at these events,” says Keven, a United States Marine Corps veteran eager to give back to his community. “And it’s all out there for free, which means people who might not otherwise have a chance to experience gaming can do so. The Library’s events helped our organization grow, and they will help establish the gaming community and leadership in Cleveland.”

Both Cella and Keven want to help guide the direction of that community—and the Library is giving them that chance by offering free gaming events that double as networking and professional development opportunities.

To step into one of Cleveland Public Library’s eSports events is to enter a whirlwind of gameplay, imagination, and collaboration. Gamers of all ages and from all backgrounds descend upon the Library’s Learning Commons to use some of the latest PC hardware to participate in LAN gaming, explore virtual reality, and play console games projected on the large screen— games ranging from Dance Central Spotlight and Rock Band 4 to Overwatch, League of Legends, and more.

Contrary to initial appearances, these events add up to more than fun and games. Gaming can foster critical thinking and social skills and help forge new career paths. Students can now receive college scholarships for their gaming abilities, and some universities are building dedicated eSports facilities, like the 4,000-square-foot complex in the works at Tiffin University. As a result, these free events at Cleveland Public Library can have a big impact on the community.

“Cleveland Public Library is a trailblazer in the eSports realm—we’re the only library system in the country doing this right now,” says Tristan Wheeler, Audiovisual & Event Planning Specialist. “We have gaming PCs, gaming consoles, and a PC dedicated to virtual reality, all of which can be used at our free events that cater to both casual and competitive audiences. It’s all about building community, bringing people together, and providing Clevelanders with access to new experiences.”

In 2018, the Library’s expanded eSports schedule will include six events held bimonthly. Not only will these events feature gaming opportunities, but they’ll also provide information about PC building, game development, live-streaming, and career and entrepreneurial advice. In addition to Outer Haven, local organizations like sfxxPLAY, Northeast Ohio Gaming Coalition (NEOGC), the Case Western University eSports Club, AllMid, and others attend the events to network, learn, and grow.

Tristan, who was instrumental in securing an Innovation Grant at the Library to fund equipment purchases and events, acknowledges that these free eSports tournaments don’t include the cash prizes most professional players seek. Even so, he stresses that eSports can provide something else for the gamers who attend the free events: a community. This type of community building aligns with the Library’s strategic priorities and might even highlight what’s in store for the future of libraries.

“We broke the mold of what libraries do every day,” he explains. “We’re working to unify gamers throughout the city. Whether you’re a competitive or casual gamer, this is where you want to be.”

Tristan points out that gaming is an engaging, safe form of entertainment for teenagers. During his own formative years, he says gaming instilled in him a curiosity about different people, places, and experiences.

“At the end of a game, I’d watch the credits and take note of the Japanese names,” he says. “By high school, I developed an interest in studying Japanese language and culture. I wanted to learn about this whole other part of the world. With eSports, you can essentially travel to multiple locations via the Internet. It can change a person’s perspective on the world.”

Diversity is a central focus at Cleveland Public Library, and eSports events are no exception. No matter their age, gender, or race, all gamers are welcome to participate. Keven calls the Library’s eSports events “a judgement-free zone,” and Tristan adds that the events break down generational barriers—it’s not uncommon, he says, to see gamers in their 60s playing next to young children under ten. Finally, while the gaming world is traditionally dominated by men and boys, the Library and eSports leaders welcome girls and women of all experience levels into the fold.

“Just because you’re a girl doesn’t mean you can’t game,” asserts Cella, who speaks from her own experience as an accomplished female gamer. “You can be just as good, if not better, than the guys.”

Above all, eSports events encompass some of Cleveland Public Library’s core values: supporting the community, embracing diversity and acceptance, providing access to new technology and skillsets, ensuring everyone is made to feel welcome, and creating connections among Clevelanders. Those strengthened connections can even be seen in Cella and Keven’s personal relationship—the two gamers and business partners recently became engaged. As Keven sees it, their love for each other is reflected in Outer Haven’s mission.

“We created Outer Haven out of love, and through that love, we have created relationships and rejuvenated a community here in Northeast Ohio,” he says.

Just as gaming brought Keven and Cella closer together, the Library’s eSports events have the power to unite people through a love of gaming and competition. Cella encourages gamers to attend an event and become a part of the community.

“If you’re trying to get your feet wet in the gaming world, the Library is a great start. It’s free, and it’s a way to meet new people who do the same things you do,” she says. “Peace, love, and video games—that’s what it’s all about.”

Upcoming 2018 eSports events will be held on March 31, May 26, July 28, September 29, and November 17. Events are held in the Learning Commons on the second floor of the Louis Stokes Wing at 525 Superior Avenue.