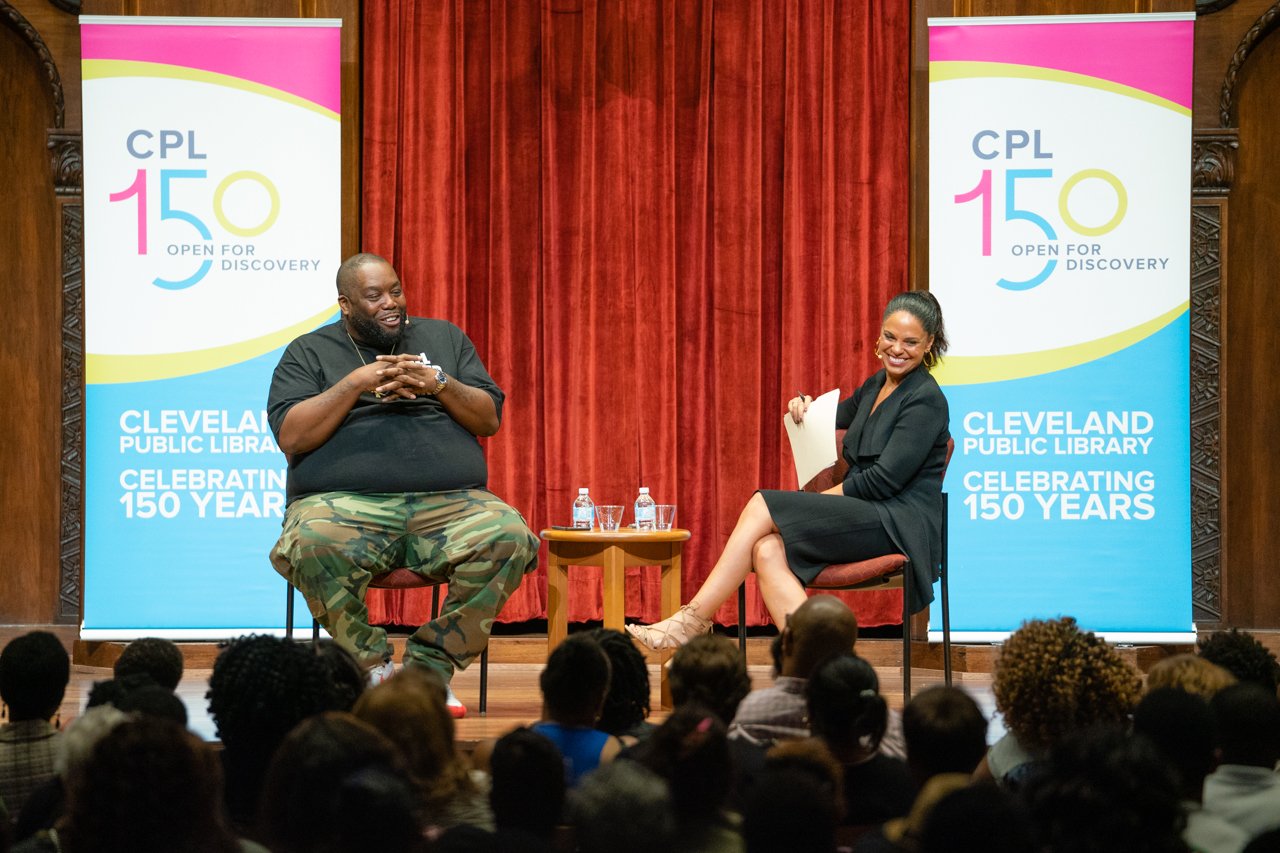 From George Orwell’s Animal Farm to Toni Morrison’s The Bluest Eye, and from the works of Zora Neale Hurston to Agatha Christie, Maya Angelou, and Nikki Giovanni, literature has inspired and influenced the lives of journalist Soledad O’Brien and rapper Michael “Killer Mike” Render. O’Brien and Killer Mike appeared in conversation to discuss the power of reading on September 24 at the Maltz Performing Arts Center, an event featured as part of Cleveland Book Week as well as the Library’s 150th anniversary year celebration.

“The Writers & Readers series is about the stories that shape us,” said Felton Thomas, Jr., Executive Director and CEO of Cleveland Public Library as he introduced the evening’s esteemed guests. “We are in store for a thought-provoking discussion tonight. No matter what, this won’t be your typical panel.”

O’Brien is an award-winning journalist, host of the syndicated political show Matter of Fact, and author of Latino in America and The Next Big Story. Killer Mike is a Grammy award-winning rapper, activist, and creator and host of the documentary series Trigger Warning with Killer Mike. Throughout the course of their conversation, O’Brien and Killer Mike ruminated on their pasts, their reading preferences, and their thoughts on the nation’s political landscape.

But through it all, books remained at the heart of their discussion.

The Power of Imagination 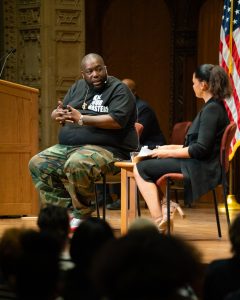 Killer Mike shared with the audience his lifelong love of reading, which sustained him throughout his childhood and, he says, helped him view the people around him with a deeper sense of empathy.

“It really gave me an open mind. I was able to understand [through reading] that people like the same things—love, lust, adventure,” he explained. “And reading was the best thing for my imagination. As a rapper, I needed a compelling story, and reading helped strengthen my imagination.”

Killer Mike cites Animal Farm as a book that perhaps most influenced his life. Orwell’s famous satirical novel made him see more clearly how people are not always treated equally—the same dynamic that today hobbles our discourse as a nation and precludes a sense of a unity.

“When you treat people differently, you create an environment of argument,” he said.

O’Brien, meanwhile, expressed her love of escapist literature—“because the real world is often too much”—and counted Agatha Christie and Nikki Giovanni among the authors she admires. The most transformative reading experience of her young life, however, occurred when she picked up Toni Morrison’s The Bluest Eye.

“I grew up in a white neighborhood on Long Island,” she explained. “I remember this feeling of, oh my god, a book where the central character is black. It was so surprising to me.”

The Benefits of Boredom 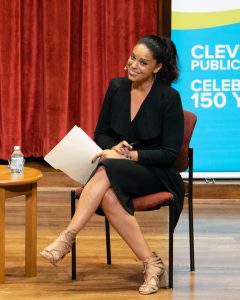 When she reflects on her early love of reading, O’Brien celebrates one simple factor that encouraged her to turn to books: boredom.

“My parents had a ‘library’—really, a bookshelf full of books—and if I told them I was bored, they’d say, ‘You can’t be bored. Have you read all the books in the library?’” she recalls. “It meant I was reading a lot at a high level, even in elementary school.”

O’Brien worries that many kids today don’t have the luxury of boredom, and that phones, tablets, and other electronic distractions might overshadow the magic of books. Killer Mike, however, countered that every child is an individual, and some kids are more likely to be drawn to reading than others. He and O’Brien returned to common ground when they expressed their preference for physical books rather than e-readers, and they also shared an enthusiasm for advocating for the books that shaped their lives.

For the audience’s benefit, Killer Mike and O’Brien each recommended two of their personal favorite books, which were available for sale after the event. O’Brien recommended Talking to Strangers by Malcolm Gladwell and The Yellow House by Sarah M. Broom, while Killer Mike recommended Mama Black Widow by Robert Beck (Iceberg Slim) and Frederick Douglass’ autobiography, Narrative of the Life of Frederick Douglass. In addition to those books, Killer Mike also pointed to Zora Neale Hurston as one of his all-time favorite authors.

“Zora’s one of my favorites because I’m a Southerner. When I read her books, I’m hearing my ancestors,” he said. “Zora Neale Hurston is absolutely a national treasure.” 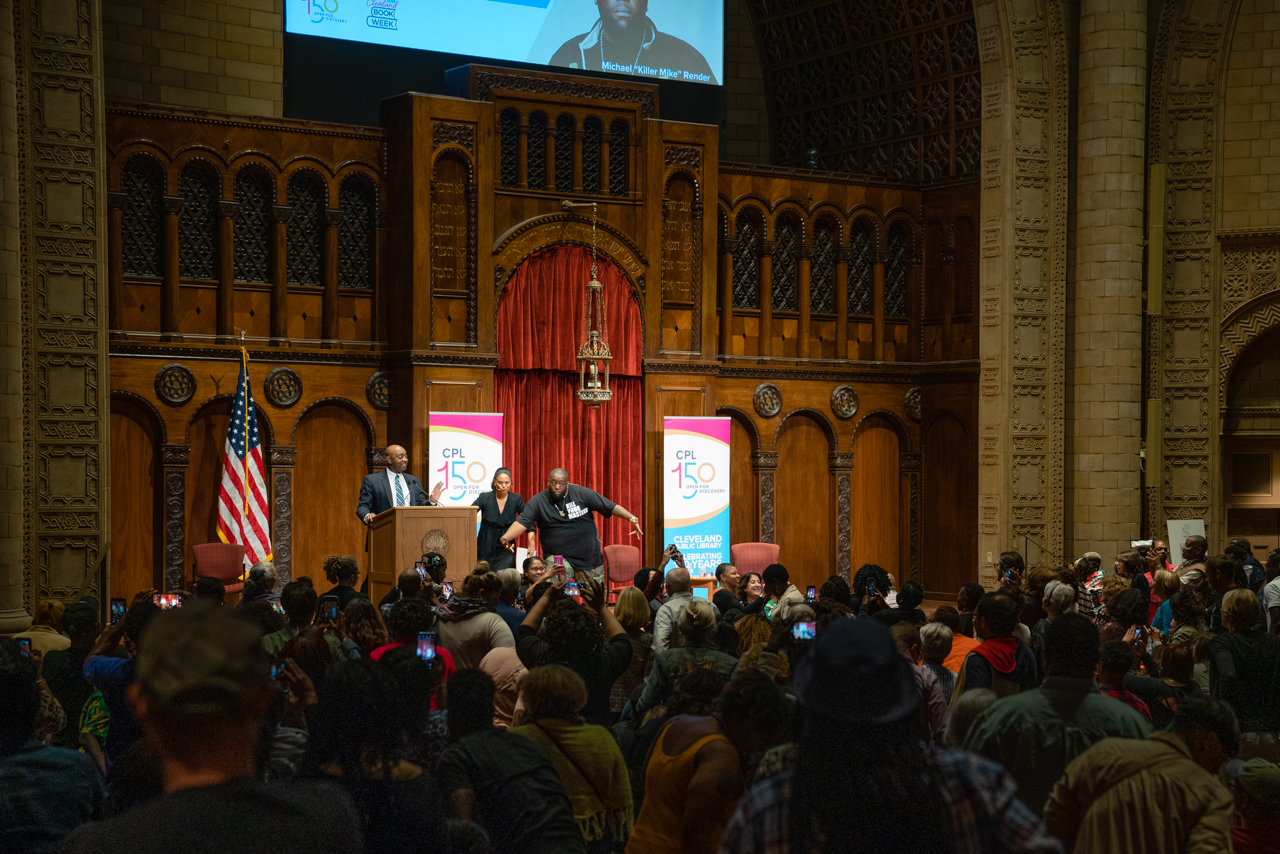 The power of reading goes beyond mere favorites or popular titles. To that end, Killer Mike pointed out that he was open to reading anything, even books with ideologies he does not agree with. When someone gave him a copy of Hitler’s Mein Kampf, for example, he read it.

“There’s nothing I haven’t been willing to read,” he said. “I want to understand human beings. I want to see what goes into the best and the worst of us.”

When talked turned to politics during the Q&A portion of the event, Killer Mike was quick to stress a need for greater connection between people who might have surface-level differences.

By fostering empathy and encouraging readers to consider the inner lives of others, O’Brien and Killer Mike suggested, books can create unity—something our current world is sorely lacking.

“The more I make connections with people not like me,” Killer Mike concluded, “the better human being I become.”