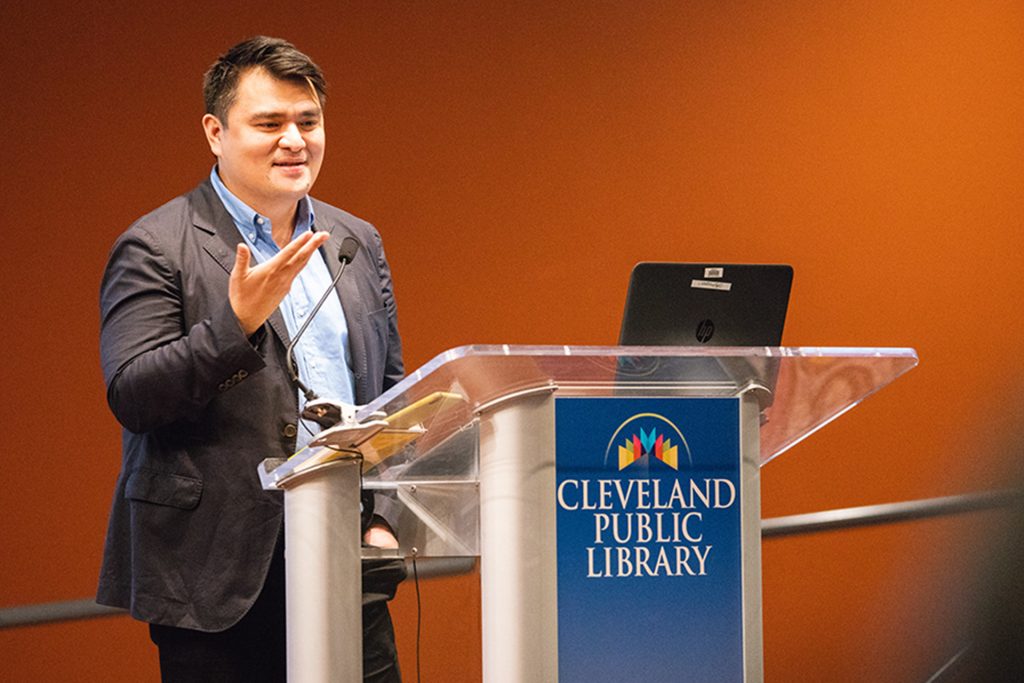 “The last time I was in Cleveland, I was scared,” José Antonio Vargas admitted during his October 13 appearance at Cleveland Public Library. He was referring to his previous visit to the city a decade ago, when he was covering Hillary Clinton’s campaign—and worried that her secret service agents would discover he was an undocumented immigrant.

“Now, my name is outside the front door,” he added, referencing the signs promoting his appearance as part of the Library’s Writers & Readers program. “And any immigrant will tell you that libraries are sacred. Libraries are how we get to know a country.”

While he might have an increased public profile, Vargas’s immigration status has not changed. He was born in the Philippines in 1981 and sent to live with his grandparents in the United States when he was twelve; at the time, he didn’t realize he was in the country illegally. In the 25 years he’s lived the United States, he hasn’t seen his mother, who is unable to obtain a tourist visa because she neither owns property nor has a degree. Vargas, meanwhile, remains undocumented and aware that he could be deported at any time.

During his Writers & Readers appearance, Vargas shared details surrounding his background, his decision to publicly acknowledge his undocumented status in 2011, his thoughts on immigration policies in America, and how he crafted his new memoir, Dear America: Notes of an Undocumented Citizen—all set against the backdrop of presentation slides featuring images from his life as an immigrant in America.

Where Are You From?

“Have you ever seen a green card?” Vargas asked, and projected an image of the green card he had growing up—and which he only discovered was fake when he was a teenager. That set him on a journey to secure an Oregon driver’s license, thanks to the help of a distant contact in the state. This license marked his first and only form of U.S. identification, and when it was set to expire in June 2011, he made a risky decision: he came out as an undocumented immigrant in The New York Times Magazine.

Since then, Vargas has worked to shine a light on the issue of immigration and what it means to be undocumented in this country. Notably, he produced and directed the documentary Undocumented, as well as White People, which aired on MTV.

“Unless you’re Native American or African American and were brought here, you came from somewhere,” he said. “When I talk about immigration with young people, it ends up being about race. I’ll ask white people, ‘Where are you from?’ I’m astounded that we have an entire generation of people who don’t know where they’re from.”

Vargas stressed that much of today’s immigration conversation is built on falsehoods. “It’s a lie that immigrants like me commit more crimes than someone here legally. If you’re undocumented, last thing you want is any contact with the police,” he said. “And it’s a lie we’re taxing the economy.”

He highlighted this last point by projecting an image of the $48,000 check he wrote to the Department of the Treasury to pay taxes in 2015.

here’s a check for $48k that I paid to IRS, which is more than happy to collect $ while DHS/ICE wants to deport us. pic.twitter.com/DEUUTIpxiJ

When Vargas prepared to write his personal story of living in America while undocumented, he said the book took on a natural three-part structure: lying, passing, and hiding. He hopes his book will create connections and encourage Americans to consider the role immigrants play in the United States.

At the same time, he pressed U.S. citizens to more deeply consider their own place in this country.

“What are you doing to earn your citizenship?” he asked, echoing the question he’s been asked regarding what he’s done to “deserve” to live here. “We need citizenship by participation,” he stressed. “I am not a citizen, but as far as I’m concerned, I’m an American. I’m just waiting for my country to recognize it.”

“With my book, I’m trying to create a different language leading to the fact that people like me are people like you,” he added.