Home Collection Highlights The Standard Bearer and the Gate Keeper

The Standard Bearer and the Gate Keeper

The 2016 presidential campaign has been unlike any other seen in contemporary times.  The Republican Party has selected Donald Trump as their candidate, who has proven himself to be a non-traditional candidate. Trump has changed the face of the Grand Old Party; so much so that many are asking is this still the party of Reagan? Ronald Reagan is still considered to be the standard bearer for the conservative movement.  While Reagan became the embodiment of the conservative movement, William F. Buckley Jr. shaped, formed and maintained what we consider to be modern conservatism.

The Special Collections Department of the Cleveland Public Library will host a conversation  about the future of American  conservatism on October 22,2016 at 1:00 downtown in the historic Main Library building. Our featured speaker is Dr. Justin Buchler, Associate Professor of Political Science at Case Western Reserve University. Dr. Buchler is the author of the book Hiring and Firing Public Officials: Rethinking the Purpose of Elections 2011.  Dr.Buchler’s  blog provides more of his political acumen. For more information about the program please contact the Special Collection at 216-623-2818)

One of the legacies of the 1964 Presidential election was a stirring speech given on October 27, 1964 during a prerecorded television fundraiser for GOP presidential candidate, Barry Goldwater.  Trailing in the polls, Goldwater and his staff wanted someone who would help breathe life back into the campaign. They had some serious doubts about the man who was selected to speak that evening.  The man who would give the speech that night was former actor and General Electric Theater spokesman Ronald Reagan.

Reagan was the co chairman of the Goldwater campaign in California. Earlier in 1964 he spoke at the RNC in San Francisco, and was approached by some prominent Californians to do a national speech to draw support for Goldwater; Reagan agreed. His only objection was that he be allowed to speak in front of a live audience. The Republican fundraisers agreed to Reagan’s request and finance the program.  However, concerns came from the Goldwater staff. They took issue with Reagan‘s comments about Social Security. He stated that Social Security would do better to have “voluntary features that would permit a citizen to do better on his own.” Hilton, Gregory. “The Politics of Social Security and Medicare.” The DC World Affairs Blog. N.p., 18 May 2009.

Goldwater’s staff did not want to give the Democrats any more ammunition against him during the final weeks of the campaign.  It was felt that if Goldwater was elected, they argued that he would get rid of the popular program. The staffers urged the senator to replace Reagan with an interview that Goldwater taped with the popular former President Eisenhower.

As the air date approached, the two men spoke. Reagan told Goldwater that he had given the speech all summer at various GOP fundraisers. No one suggested that he was trying to harm the program that many elderly citizens relied on. Goldwater confessed that he had not heard the speech. He promised Reagan that he would listen to the speech and then make a decision. Upon hearing the speech, Goldwater said “What’s the hell wrong with that.” Hilton, Gregory. “The Politics of Social Security and Medicare.” The DC World Affairs Blog. N.p., 18 May 2009.

There was something that happened that night when Reagan delivered his speech, his “A Time for Choosing.”, or later known as “Rendezvous with Destiny.” made him a star. That night he had no idea what his deliver y of conservative principles did for the movement.  Although he had been told that he’d a great job, Ronald Regan just went home to bed  “Hoping I hadn’t let Barry down.” Reagan, Ronald, An American Life: The Autobiography (NY, Simon & Schuster,1990).143

“Washington Post columnist David Broder wrote that the night of Reagan’s address represented “the most successful political debut since William Jennings Bryan” and his “Cross of Gold” speech in 1896.” Fund, John .“Reagan’s Famous Speech Turns 50 Today: What ‘A Time for Choosing’ Meant.” The National Review. ,27 Oct 2014.

Reagan ended up raising $8 million (which today would be well over $60 million dollars.) In his hands, Goldwater’s philosophy had an entirely new life.  Reagan’ ability to speak right to the heart of the listener and his photogenic looks were a winning combination.  Regan’s former aid Jeffrey Lord simply stated that “The real importance of the speech was that Reagan had looked Americans in the eye and stood for something.” Fund, John .“Reagan’s Famous Speech Turns 50 Today: What ‘A Time for Choosing’ Meant.” The National Review. ,27 Oct 2014.

Reagan had a profound understanding of conservative intellectual principals. He consumed a diet of magazines such as the Freeman, Human Events and the National Review which he would read on his cross country trips for GE. He would use these ideals to help formulate his own approach to conservative solutions on various topics.

“Buckley wrote that what National Review had striven to do from the beginning was to achieve “a general consensus on the proper balance between freedom, order, justice, and tradition”—that is, to fuse the basic ideas of traditional conservatism and libertarianism.”  Edwards, Lee “Standing Athwart History: The Political Thought of William F. Buckley Jr.” The Heritage Foundation.,5 May 2014.

He had goals for the movement and the journal. Buckley felt that the Republican party would be the party of conservatism. The party should be Right. The movement should be free from fanatical factions of the party. At any time, confront liberals and their views. Finally fight for an aggressive end to communism and the Cold War. Using his writings in National Review and his bi weekly syndicated column On the Right column in addition to his public affairs program Firing Line, Buckley purged the conservative moment of the more extremist factions and united the other groups by one objective, to counter liberalism.

Buckley also hosted a public affairs program, Firing Line from 1966 -1999. During the course of its thirty- three run Buckley taped 1,504 episodes featuring some of the most significant figures of the time. 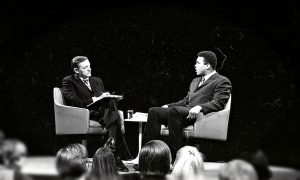 Photograph from the Hoover Institute.

The guests ranged from Muhammad Ali, Allen Ginsberg, the Dalai Lama and Hugh Heffner. A skilled debater from his college days at Yale, Buckley would take his guest on in a polite but caustic manner.