The Sound of Music: A Teen Explores New Instruments at South Branch 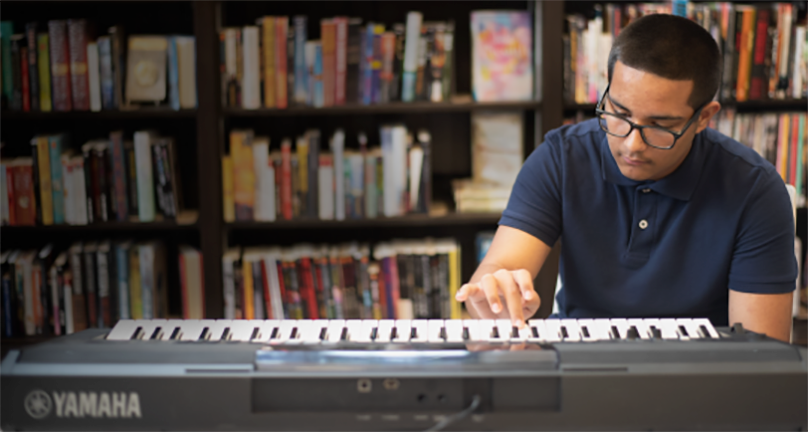 When Joswen Colon began visiting South Branch last year, he was looking for a place to spend time with friends and maybe play some video games. What he found, however, amounted to so much more. Before long, he was using professional recording software, learning to play two instruments, developing leadership skills, and forging new paths for the future. It all started with a love of music—and with Cleveland Public Library.

“I like coming here because I like music and hanging out with friends,” Joswen explains. “The Library is one of my favorite places. I don’t write music, but I’ll play and then remember the notes. It’s fun, and I’m proud of myself because I make the music sometimes.”

Joswen’s initiative caught the attention of Joel Lefkowitz, Library Assistant-Youth Emphasis at South Branch. Known as “Mr. J.” to the kids and teens, Joel manages the branch’s sound booth and teaches the orientation class all patrons must enroll in before using the equipment and instruments. While he helped Joswen learn to use the recording software and start learning guitar, he can’t take credit for Joswen’s talents on the keyboard.

“Joswen just started playing the piano on his own. He taught himself,” Joel says. “One day I saw him watching YouTube [instructional videos], and then he was playing along to a variety of pop songs. He plays Beethoven, too. I didn’t push him—he did this all on his own.”

Joswen’s musical education at the Library includes participating in a Tri-C Vocal Arts Academy program and, more recently, taking guitar lessons offered by the Cleveland Classical Guitar Society. He’s also developing additional valuable skills. As the person in his friend group with the most experience with the sound booth, Joswen has taken on a leadership role, helping his friends play and create music.

This love of music seems to run in the family. Joswen’s younger sister, Jazmine, enjoys playing the ukulele and writing her own music. Just as Joswen is drawn to both to the latest pop hits and classical composers like Beethoven, Jazmine’s musical tastes also run deep. When she first told Joel what songs she’d like to learn, for example, one of her answers surprised him: “Fly Me to the Moon” by Frank Sinatra.

“I laughed,” Joel recalls. “That was not what I was expecting.”

Joswen was 13 when he started visiting South Branch in late 2018 following his family’s move to the neighborhood from Parma. Their timing was perfect, considering the newly preserved, renovated, and expanded branch reopened in November 2018. As a Carnegie library building that first opened in 1911, the preserved South Branch retains a sense of its history and original architecture while also offering modern amenities, including the sound booth.

All this adds up to a perfect place for teens like Joswen and Jazmine to visit during afterschool hours.

“We’re super proud they’re finding positive choices in the world to take,” says Wendie, Joswen and Jazmine’s mother. “Paying for private lessons isn’t something we could do, so this is an awesome service the Library is providing. The Library is a true gem to the community. It’s just essential that we have access to that information and programs.”

Joswen’s father, José, echoes Wendie’s gratitude for the Library. He’s recently learned to use Cleveland Public Library to access computers or search for a job. Most of all, he’s pleased the Library can help enrich the lives of his children while fostering a love of music. As a singer and someone who maintains a deep appreciation for many kinds of music, José is especially glad to see his kids express an interest in this area.

“I want to encourage them to do different things, like singing, music, sports, and talking to the different people they might meet at the Library,” José says. “I want them to have many opportunities.”

Gaining Skills for the Future

South Branch’s sound booth includes guitars (bass, acoustic, and electric), a ukulele, an electronic drum set, a keyboard, a microphone, and Pro Tools, professional-grade sound recording and production software. Giving kids and teens access to this equipment helps the Library create communities of learning. According to Joel, a young patron who takes the sound booth orientation class can then help teach the next person who wants to learn, who can then teach the next person, and so on.

“At first, kids go into the south booth and think it’s going to be instant success and sound like it does on the radio,” he observes. “They have to learn how it works and get permission to be there. They have to show up on time, they have to work hard and not get distracted, and they need to make the most of the time while they have it.”

As an eighth grader, Joswen is mostly living in the moment and experimenting with making music, but his experiences in the sound booth just might influence his future. He’s expressed interest in studying musical or digital arts in school one day, and it’s even possible that the Library might play another role in his life in the coming years—that of an employer.

“I think I’d like to have a job at the Library,” Joswen says.

It is, after all, one of his favorite places in the world.

The sound booth at South Branch is open to youth ages 13 and up and adults with a valid Cleveland Public Library card. Patrons must take an hour-long orientation class, which is held from 4:30–5:30pm on the last Wednesday of the month (or by appointment if necessary). After orientation, patrons can reserve up to two 2-hour sessions in the sound booth a week; additional walk-in time may be permitted if the space is not in use. For more information, please contact South Branch at 216-623-7060.