Home General Information The Heart of the Community

The Heart of the Community 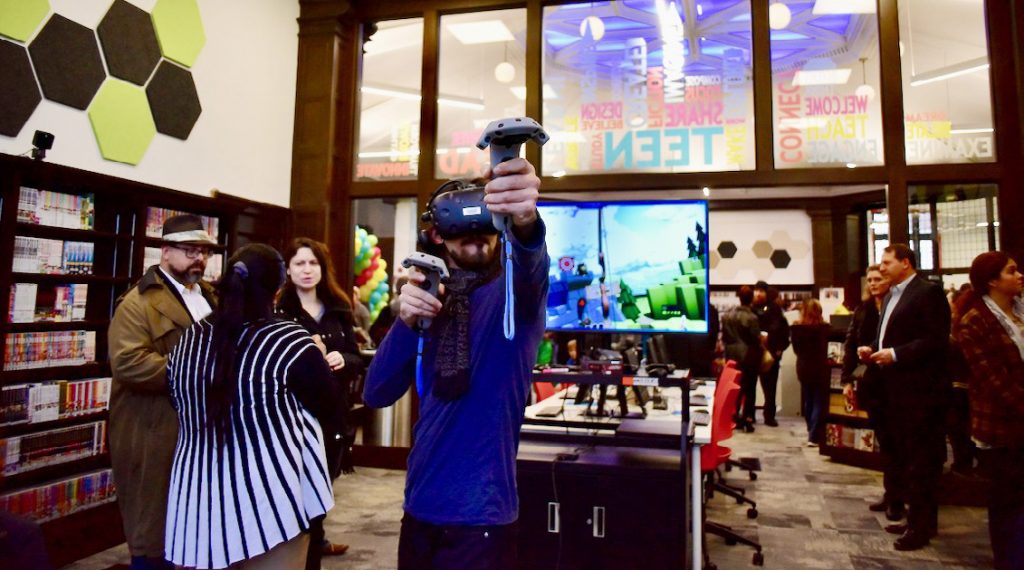 On December 1, 2018, hundreds of visitors attended the newly restored South Branch reopening ceremony. The day was a whirlwind of food, music, crafts, cake, entertainment, and, most of all, a celebration of the patrons, citizens, advocates, and staff who helped restore the branch to the community.

The event provided something for all attendees, no matter their age or interests. For thirteen-year-old Jada Strother, attending the ribbon-cutting ceremony meant playing an electronic drum set and exploring the branch’s new sound booth. “There’s always something to do at the library,” she explained. “Plus, libraries are a good way to get people together.”

For Nilsa Jimenez, a Clevelander who visited South Branch during her own childhood years, the newly restored branch is a place to bring her five-year-old son, Nicholas. “I have fond memories of South, and I’m so glad to see it has reopened,” she said.

For Don Toennies, age twenty, South’s return ensures the restoration of an essential community hub. “When I heard South was reopening, I made myself a promise that I’d be here today,” he said. “At the library, you can meet new people and learn about different cultures, different ways of life. It’s a beautiful place. I’d love to see the library become the heart of the community again— and considering how many people showed up today, it will.”

And for Norma Castro, who lived and worked in the neighborhood for more than a half century, South’s restoration was nothing less than a homecoming. She and her late husband ran a grocery store in the neighborhood for decades, and the library was as much a part of her life as it was for her children. “I walked here every day; it was a part of growing up,” she recalled. “When I came in today and saw the [restored space], I got teary-eyed.”

South’s reopening was a project years in the making. The branch, built with Carnegie funds, opened in 1911. It served the Tremont and Clark-Fulton communities for more than a century before closing in 2013 due to structural and mechanical issues that emerged in the aging building. A smaller, temporary location on Clark Avenue housed the branch as the Library administration contemplated South’s future. Soliciting and listening to community feedback played a pivotal role in that process.

“We had the difficult decision: to build a new branch, or to rebuild this one,” Felton Thomas, Jr., Executive Director and CEO of Cleveland Public Library, said during his remarks at the ribbon-cutting ceremony. “We ultimately decided to unify this community by rebuilding and renovating the building.”

The branch was updated and expanded to include a new community room, ADA accessibility upgrades, new furnishings, a restored fireplace and skylight feature, and more. According to Peter Bolek, President of HBM Architects, considerable care was put into respecting the building’s history.

“The materials were chosen with the same thoughtfulness as in 1911, and we took cues from original architectural details,” Bolek said during the ceremony. He added that he looks forward to seeing “what this branch can do for the community for the next 100 years of its life.”

Cleveland City Councilwoman Jasmin Santana also spoke at the rededication ceremony. In addition to welcoming her Ward 14 constituents back to the branch, she shared her personal connection to South. “I have great memories from right here,” she said, referencing her time growing up in the neighborhood and patronizing the library. “