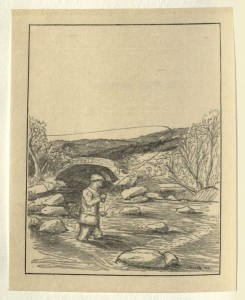 The Derrydale Press was a small publisher of finely crafted sporting books featuring topics such as hunting, fishing, sailing, skiing, polo, tennis and horseback riding. The press was started by Eugene V. Connett, III in 1927 and between then and 1942, The Derrydale Press published 169 books, 30 of which were privately printed. The mission of The Derrydale Press was “to create works of the highest quality for the enjoyment of contemporary sportsmen and their descendants.”

Eugene V. Connett, III was a sportsman all his life and wrote sporting themed articles for Field and Stream, The American Angler and The Sportsman. In 1922 his first book, Wing Shooting and Angling, was published.  Besides hunting, fishing and writing, Connett also like to collect sporting books and sporting art. He sold a hat factory in Newark, NJ that he had inherited and in 1925, at the age of 34, he began working for a printer so he could learn the trade and business.  Two years later he started The Derrydale Press.

Connett wrote “We should like to call attention to the fact that the Derrydale hand-colored sporting prints are the only hand-made, permanent prints depicting present-day American sport, and that they will survive as probably the only pictorial record of this great sporting era – aside from the very limited number of original paintings being done. For this reason alone they are worth collecting.”

The Derrydale Press was started at a time when the American economy was strong and people had the time and money to pursue hobbies and pastimes.  After the stock market crash of 1929 very few people could continue on as before. But The Derrydale Press’s fine quality books had a strong enough customer base of wealthy collectors that it was able to stay in business when many other presses had to close. But the production from the press had slowed down and because Connett refused to lower the quality of materials used in his books the press started to lose money. Eventually Connett’s personal finances were depleted.  In the late 1930s the press was saved by the wealthy patron, Hooker Talcott, who provided the funding to keep the business solvent.

By the early 1940s, The Derrydale Press had new problems to deal with. Because of the resources being used during World War II, the press could no longer obtain the highest grade all-rag paper required for its prints and books.  In early 1942 Connett liquidated the Press, selling the books and related materials to Nat Wartels of Crown Publishing, Inc. Crown never used The Derrydale name but in the 1980s it was sold to Doug Malden, who operated a press under the name Derrydale in Mississippi. In 1999, the name was sold to Jed Lyons of Lanham, Maryland who published reprints of original Derrydale books and contemporary books as well.

Connett also gave the rights to all his unsold prints and the right to use the Derrydale name in promotion of the prints to Frank L. Lowe, his sales manager. Lowe also published 29 prints in his own name over the next 6 years. In 1948 he too stopped making and selling prints.

Two complete bibliographies have been published:

The Cleveland Public Library has the entire collection of Derrydale Press books thanks to the generous donation of collector Robert Hayes Gries. The collection is housed in the Special Collections Department.

“At times I have published a book which I knew in advance would never be a profitable venture but I am confident that future generations of American sportsmen will highly appreciate the importance of such books.” 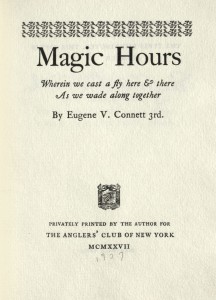 Magic Hours, wherein we cast a fly here & there as we wade along together. – Eugene V. Connett

New York: Privately Printed by the author for the Anglers’ Club of New York, 1927.

Magic Hours was the first book printed by The Derrydale Press. 100 copies were intended to be printed but only 89 were actually made. 20 pages, 2 illustrations by Connett. Only says Derrydale Press in very small print on the back of the title page.  This book was mostly distributed to the Anglers Club and close friends of Connett. 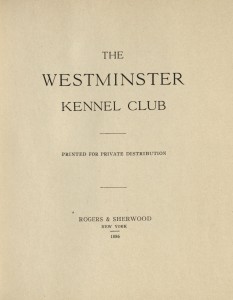 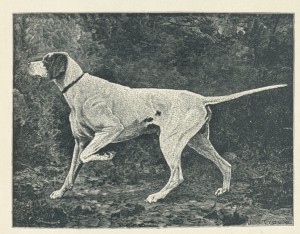 Printed for private distribution. Originally published in 1886.  “A replica of the 1886 yearbook which our president, Mr. William Ranch, thought would be interesting for the Club members to keep.” – Treasurer of the Westminster Kennel Club

One hundred copies of this book have been printed in February 1929 by Eugene V. Connett at the Derrydale Press, of which this copy has been made especially for Mr. Richard H. Williams, no. 26. Illustrated with four plates and a map. 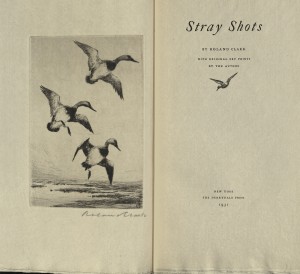 Roland Clark’s matchless drypoints, all first impressions, printed from the plates on fine watermarked deckle edge paper and signed by him, are luminous.

“One of the most beautiful of the Derrydale Press books in every phase. In my opinion this one will continue to go up in value forever.” – Frazier 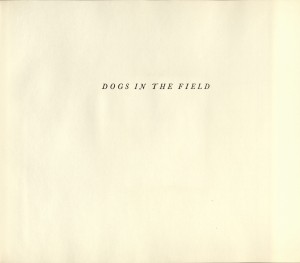 Dogs in the field by Marguerite Kirmse; foreword by John Taintor Foote.

No. 599 of 650 copies. Illustrated with twenty-four plates in the volume and the portfolio of six plates.

Kirmse was a British-born artist, whose drypoints of dogs Connett published in two books, Marguerite Kirmse’s Dogs (1930) and Dogs in the Field (1935). 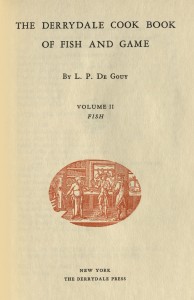 The Derrydale cook book of fish and game by L. P. De Gouy 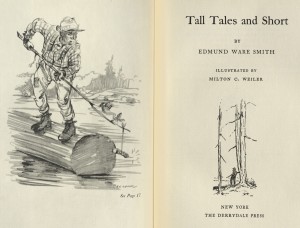 No. 314 of 950 numbered copies. Frontispiece and ten black-and-white illustrations by Milton C. Weiler. Collection of short stories of hunting and fishing, including One-Eyed Poacher stories.