Home History Cleveland History The Death and Life of a Statue: How The Thinker Was Reborn in Cleveland

The Death and Life of a Statue: How The Thinker Was Reborn in Cleveland 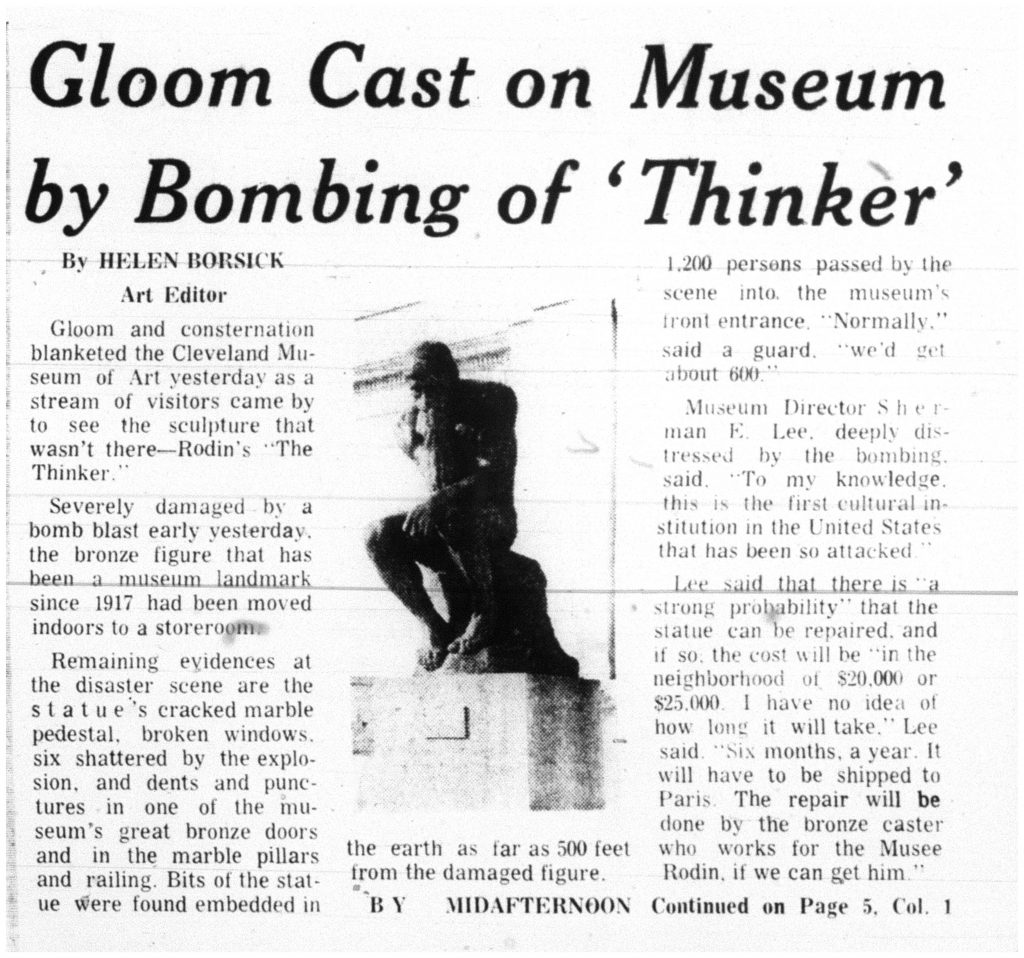 In the early hours of March 24, 1970, one of Cleveland’s most visited landmarks, an enlarged cast of Auguste Rodin’s famous sculpture The Thinker, was changed forever. The beloved statute outside the Cleveland Museum of Art was rocked by an explosion caused by a metal pipe bomb attached to a ten-foot, military-style fuse.

According to the Cleveland Museum of Art, Cleveland’s The Thinker was one of fewer than 10 casts of the statue made during Rodin’s lifetime and under his supervision. Rodin’s original The Thinker was part of his larger work, The Gates of Hell, which was inspired by Dante’s Divine Comedy. Here in Cleveland, the cast of the renowned statue was installed in front of the Cleveland Museum of Art shortly before Rodin’s death in November 1917. For decades, this 900-pound cast of The Thinker sat in pensive contemplation until it was brought down by the 1970 bombing.

The bottom half of The Thinker was destroyed in the explosion, which blasted away the statue’s feet and base. The explosion toppled the statue to the ground and sent shrapnel flying as far as 500 feet away. The Cleveland Museum of Art, in addition to the loss of the statue, was faced with dented doors, damaged pillars, and an unsolved crime.

This act of vandalism was representative of the tumultuous atmosphere in the United States in 1970. The Vietnam War was becoming increasingly divisive, with a flourishing anti-war sentiment and protests raging across the country. Because of the national strife, 1970 was quickly becoming a year peppered by domestic bombings, and Cleveland was no exception. (At this point, while Cleveland was no stranger to bombs, it was not yet considered “Bomb City, USA.”)

Such political unease was likely connected to The Thinker bombing, especially considering the message hastily scrawled in spray paint at the base of the toppled statue: “Off the ruling class.” Radical groups such as the Weathermen and Students for a Democratic Society were active in Cleveland at the time, but neither group claimed responsibility for the attack. The crime has remained unsolved for almost 50 years.

“To my knowledge, this is the first cultural institution in the United States that has been so attacked,” said Sherman E. Lee, Director of the Cleveland Museum of Art at the time of the bombing. “Whoever did it is punishing himself and the general public and future generations,” he added, as reported by The Plain Dealer.

After the bombing, 1,200 people visited the site of the bombing to express their support or voice dismay at the brutal attack on the Cleveland cultural staple. Damage to the statue was originally assessed at $25,000, more than 10 percent of the statue’s estimated $200,000 value in 1970. Today, the damage would total over $150,000. Hesitant to invest in costly repairs and reticent to replace the original statue, which Rodin himself had personally supervised, the Cleveland Museum of Art was faced with a conundrum. What would they do with the irreversibly damaged The Thinker?

Shortly after the explosion, the Cleveland Museum of Art displayed “before and after” photos of The Thinker, highlighting the damage caused by the vandalism. Although many options were considered for restoration, the museum ultimately decided to continue displaying The Thinker in its damaged form. This option for conservancy allowed the statue to remain mostly intact, therefore preserving Rodin’s vision.

As the March 31, 1970 edition of The Plain Dealer reported, the museum displayed the damaged statue with a “before” photo for comparison. The Thinker was displayed in this way “to draw wider attention to this senseless attack on our cultural heritage and that of future generations,” according to Lee. 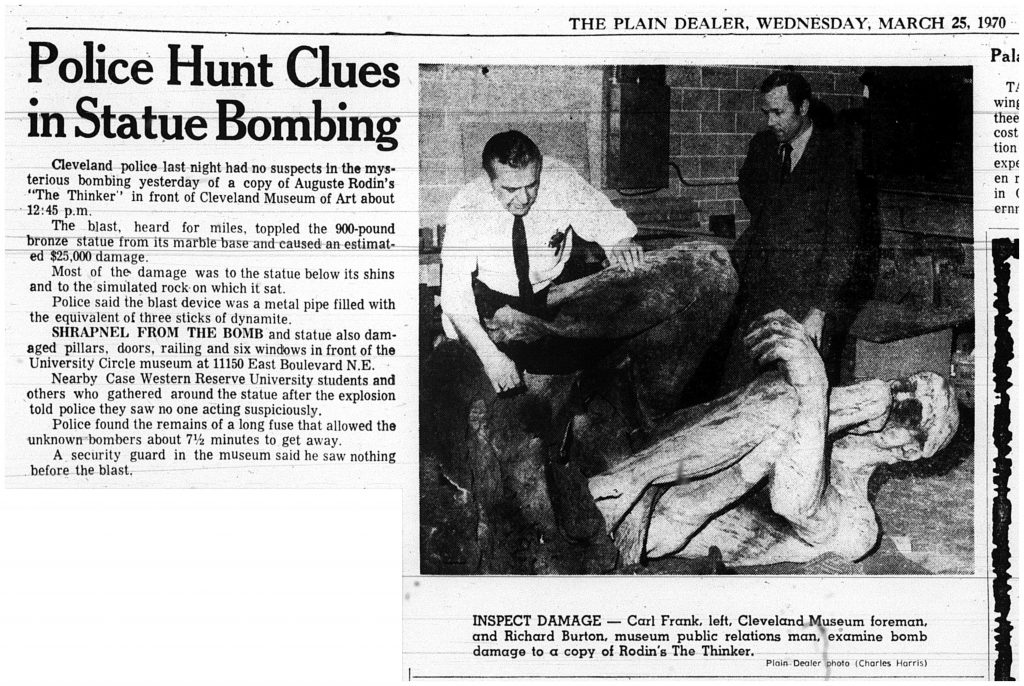 Investigators examine the damage to the upended Thinker.

In 2017, the statue still sits in front of the Cleveland Museum of Art, a plume of bronze escaping from its base. A plaque was added to note the damage from the bombing, marking The Thinker as a victim of the turbulent 1970s. Although The Thinker has been forever altered, he continues to inspire future generations of museum visitors as well as students of history.