Home Superman: From Cleveland to Krypton – An Exhibit

Superman: From Cleveland to Krypton – An Exhibit

Follow Superman’s journey from his creative birth in Cleveland to his growing international popularity, his connection to social justice issues, his influence on the current superhero craze, and the pride our community maintains for its homegrown superhero.

Three floors of exhibits in the Main Library featured memorabilia, art and artifacts from the Mike Curtis Collection of Superman Memorabilia and other prominent collectors.

For more information, contact the Literature Department: 216-623-2881 or Literature@cpl.org 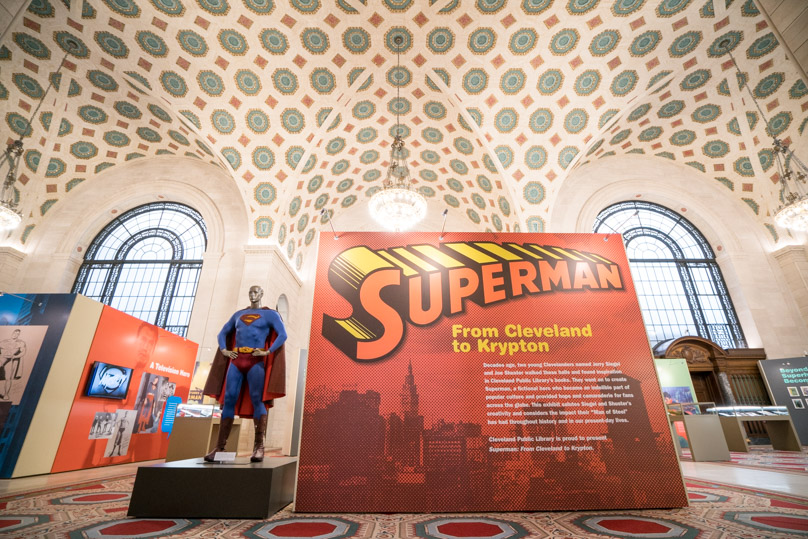 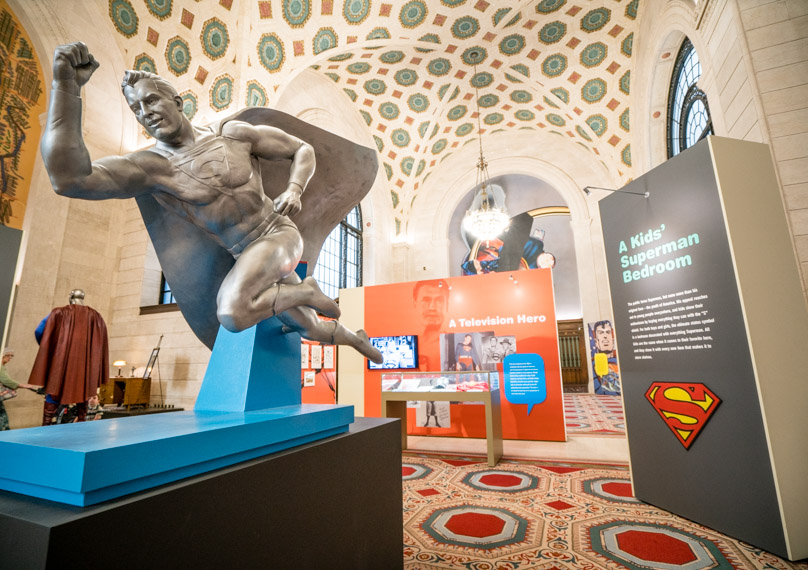 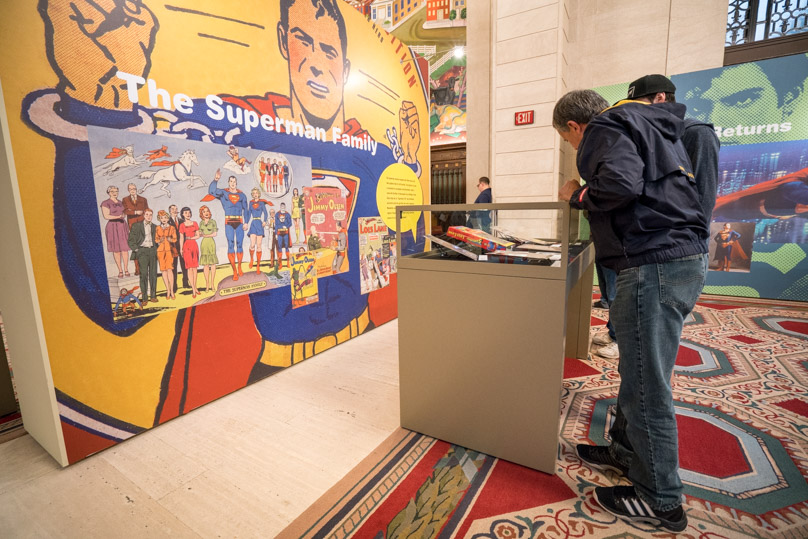 An iconic comic book superhero created in the 1930s, Superman is perhaps best characterized by his famous motto: “Truth, Justice and the American Way.” According to his origin story, Superman was born as Kal-El on Krypton, a planet doomed to self-destruct. He managed to escape to Earth in a special spaceship constructed by his parents, but the debris from the explosion produced kryptonite, a radioactive substance lethal to Krypton inhabitants. On Earth, Kal-El became known as Superman, a superhero with many extraordinary powers as well as a vulnerability to kryptonite.

Who were Superman’s biological parents?

Superman, or Kal-El, was born on Krypton to parents Jor-El and Lara. Jor-El was a scientist who tried to warn the citizens of Krypton of its impending destruction, but he was ultimately only able to save his infant son. Both Jor-El and Lara perished in Krypton’s explosion.

Who created the character of Superman?

Two young men in Cleveland, Jerry Siegel (1914-1996) and Joe Shuster (1914-1992), created Superman in 1933. Siegel and Shuster each lived with their Jewish immigrant parents in the working-class Glenville neighborhood in Cleveland. Siegel initially conceived of Superman, and Shuster brought the character to life through sketches, sometimes drawing his creations on brown wrapping paper or the back of wallpaper. The two friends drafted the first Superman comics in Siegel’s childhood home in Glenville. After struggling to promote Superman for several years, Siegel and Shuster sold the rights to DC Comics in 1938 for $130, an amount that would be equivalent to just over $2,000 in 2017.

What happened to the Siegel home?

Upon the sale of Jerry Siegel’s boyhood home on Kimberly Avenue in 1950, the family moved to University Heights. Over the decades, the house fell into disrepair and was sold again in 1983. When some dedicated comic aficionados and Clevelanders decided to recognize the achievements of Superman’s creators, they formed the Siegel & Shuster Society. As their first initiative, they raised funds to restore the Siegel home as the “Birthplace of Superman.” They also worked to create a permanent Superman display at Cleveland Hopkins Airport and campaigned to produce an Ohio license plate emblazed with the iconic “S” shield and the motto “Truth, Justice and the American Way.” These efforts helped promote Cleveland as Superman’s original home.

What are some of Superman’s unique characteristics?

Superman is one of the most widely recognized superheroes in the world. He wears a blue costume with a red cape, red boots and a red-and-yellow “S” shield on his chest. His many superpowers include flight; super strength, speed and hearing; heat and x-ray vision; a photographic memory; vocal and ventriloquist powers; and super intellect and mental capabilities. Superman gained these powers from the yellow sunlight he absorbed when he entered the Earth’s atmosphere as an infant. His incredible invulnerability means he cannot be harmed by fire, knives, bullets or bombs, and he cannot be crushed by heavy objects. His single weakness is kryptonite, the radioactive material created from the debris of his home planet.

Who are Superman’s villains?

Throughout Superman’s long history, he has faced off against numerous villains determined to thwart him. Some of Superman’s most infamous villains include:

Who is Clark Kent?

Clark Kent is Superman’s secret civilian identity. His Earth parents are Jonathan and Martha Kent, who found and adopted baby Kal-El after his spacecraft crashed in a cornfield in Smallville, Kansas. The Kents named their son Clark and instilled in him strong moral values. Clark, or Kal-El, developed his powers as Superboy before growing up to fight evil as Superman. As Clark Kent, he concealed his superpowers and presented himself as a mild-mannered reporter for the Daily Planet in the city of Metropolis.

What is the Daily Planet, and who works there?

In the Superman universe, the Daily Planet is a newspaper in Metropolis where Clark Kent works as a reporter. Other notable staff members include Perry White as Editor and Jimmy Olsen, a young photographer and Clark’s friend. Lois Lane is a star reporter for the paper who becomes Clark Kent’s friendly rival and Superman’s love interest.

Who served as inspiration for Lois Lane?

Lois Lane’s character was influenced by several women, including real-life journalist Nellie Bly and the fictional reporter Torchy Blane, who was portrayed by actress Glenda Farrell. Jerry Siegel named the character after the American actress Lola Lane. Finally, model Joanne Carter inspired both Lois Lane’s physical appearance and her personality. As a teenager, Carter connected with Joe Shuster after she placed a model-for-hire ad in the classified section of the Plain Dealer. She went on to become a major inspiration for Lois Lane—as well as Jerry Siegel’s eventual wife. Carter and Siegel married in 1948.

What is the Mike Curtis Collection of Superman Memorabilia at Cleveland Public Library?

Mike Curtis is a writer and comic aficionado from Arkansas. He writes for the syndicated comic strip Dick Tracy and has spent more than forty years amassing an extensive Superman memorabilia collection. In 2016, Curtis donated his collection to Cleveland Public Library. The collection features thousands of items, some dating back to 1939, and includes comics, posters, toys, packaging, clothing, photographs and other miscellaneous memorabilia. For more information about the collection, contact the Literature Department.

Thank you to the following individuals or intuitions for the loan of collectible and archival materials for the exhibit Superman :  From Cleveland to Krypton and for assistance in preparing materials: