This painting of Superman by pulp magazine artist H.J. Ward comes to our exhibit after a long and mysterious journey.  It was commissioned for $100 in 1940 to promote the Superman radio series, and for many years hung in the offices at DC Comics’ New York headquarters.  Jerry Siegel and Joe Shuster saw it every time they visited DC, but the painting disappeared in 1957 when publisher Harry Donenfeld retired.  An art historian named David Saunders tracked it down to Lehman College in the Bronx in 2010.  This is the first time the painting has been seen outside of New York City.

Another mystery is why an image painted in 1940 has a version of Superman’s emblem that didn’t appear until 1941.The easiest explanation would be that this is the first appearance of the emblem appeared, and it took a year before the artists at DC adopted it.  However, in reality the painting was modified to accommodate the radio serial, and is the only time Superman’s shield has been represented with six sides. 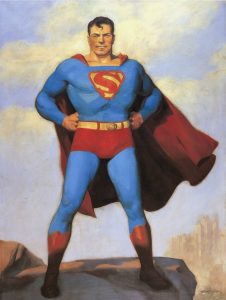 The Work of H.J. Ward

The exhibit Superman: From Cleveland to Krypton will be at Main Library from May 6-December 31, 2017.