Home History Remembering William H. Brett on the 100th Anniversary of His Death

You can now renew your expired Library card online.

Remembering William H. Brett on the 100th Anniversary of His Death 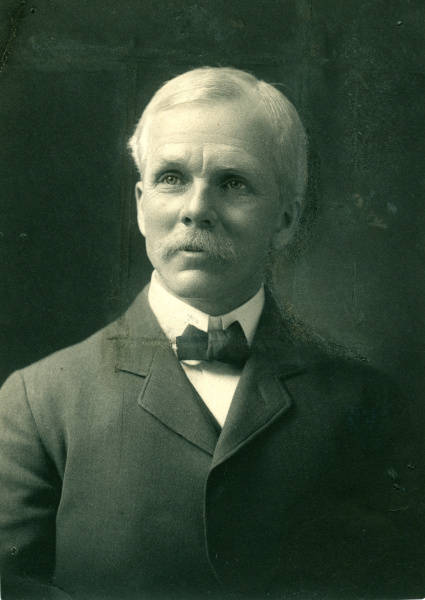 August 24, 2018 marks the 100th anniversary of the death of William Howard Brett, the renowned librarian who served as Director of Cleveland Public Library from 1884 to 1918. As a widely celebrated and respected leader in the library field, Brett’s legacy is enduring. He advocated for the “open shelf” system to bolster public access to library materials, vastly increased the Library’s circulation and staff size, trained and mentored aspiring librarians, was known as “the greatest children’s librarian,” served as a dean of the Western Reserve Library School, and, most of all, worked tirelessly on behalf of the Library and the city’s citizens during his 34-year tenure. Brett was much beloved by both his staff and the Cleveland community, and he is considered one of the nation’s great founding librarians.

Brett was struck and killed by a drunk driver in downtown Cleveland on August 24, 1918. At the time, he was carrying architectural plans for the Main Library building, which would be completed in 1925. Brett was succeeded in his work by Linda A. Eastman, his longtime colleague and friend who went on to become a celebrated Director of the Library in her own right. Eastman was with Brett at the time of the fatal accident, and she went on to respond to and archive many of the condolences that flooded the Library following his death. She also assisted in organizing memorials, commiserating with staff members, and carrying on Brett’s work and legacy.

Two slideshows appear below. The first features excerpts from some of the condolences sent following Brett’s death; unless otherwise noted, these excerpts were selected from letters addressed to Eastman. The next slideshow offers a visual sampling of correspondence, news items, and memorial publications surrounding Brett’s passing. All materials are published here courtesy of the Cleveland Public Library Archives:

What would Mr. Brett have done?
“We shall, I hope, all of us, for many years to come, make our decisions as to our work by thinking, ‘What would Mr. Brett have done? What would Mr. Brett have thought about this?’”
—Linda Eastman, in a staff meeting held in Brett’s memory on September 4, 1918
A Soldier for Humanity
“He was one of the most self-less men I ever knew. One seldom thought of Mr. Brett himself, so incarnated was he in his duty . . . Mr. Brett’s personality was so strong and so fitting into its place and times that it almost eluded the beholder, as Greek architecture. It is so perfect that it hides is very perfection . . . He worked at his job with constancy, early and late, week in and week out, year by year . . . Mr. Brett seemed to me a soldier, a soldier for humanity.” –Charles F. Twing, President of Western Reserve University
Beloved by His Whole Staff
“Was there ever a librarian as beloved by his whole staff? And was there ever a staff who could cherish so many gracious memories of their chief?”
–Julia S. Harron, Cleveland Public Library employee
A Great Democratic Librarian
“To me Mr. Brett has represented a great democratic librarian with the vision and aspiration for the ‘glory and honour and immortality’ for all the people through the chosen influence of books and libraries . . . To the library student and worker he made library work human and helped to make libraries a home out in the world.”
—Elizabeth Doren, former student of W.R.U. Library School
The Library World's Strongest Man
“I was so profoundly shocked and grieved over the announcement of the death of Mr. Brett that I want you to know at once how much I feel that the library world has lost its strongest man and the librarians of the state their best personal friend.”
—Mary P. Martin, Librarian, Canton Public Library
His Genuine Interest in People
“I believe that was what made Mr. Brett great as he was—his really genuine interest in people—and made his library great as it is. I have worked in a much larger library since I was in Cleveland but I did not find that human feeling that is so marked in the Cleveland Public Library . . . I feel most confident that the vital thing which Mr. Brett has given to the Library and to humanity can never be taken away.”
—Helen Montgomery Russman, former Library staff member
A Splendid Companion
I felt that Mr. Brett was personally more congenial to me than anyone in the profession—that I would rather visit, travel, or talk with him than with anyone else. His sanity, his kindliness, and his wide interests made him a splendid companion.
—Matthew S. Dudgeon, Wisconsin Free Library Commission
An Outstretched Hand and Welcoming Smile
“It seems to me most wonderful to have worked under such a leader, whose outstretched hand and welcoming smile always made us so glad to see him. I suppose each one has some unusually pleasant memories of him, as I have, and will always hold them as I shall.”
—Mary K. Pearson
He Remains with Us
“It is impossible to think of Mr. Brett as dead. He went, literally, with his work still in his hands. It was torn from them and left for the Staff to ‘carry on’. He remains with us in that work however, and we still keep him with us to the exact extent to which we are able to reflect his wonderful spirit in our daily tasks.”
—Vice Librarians Linda Eastman and Carl Vitz, in an August 30, 1918 letter to staff
A Severe Loss
“It is certainly a very severe loss to the whole library profession.”
—Gratia A. Countryman, Librarian, Minneapolis Public Library
Fine and True and Lovable
“He was fine and true and lovable. Not many just like him. What he has done for Cleveland can never be measured. It’s splendid to have known him.”
—Margaret Craig
An Unmeasured Loss
“Not to have known him would have been an unmeasured loss. His influence must live on.”
—Mary E. West, First Assistant, Columbus Branch, New York Public Library
Universally Mourned
“He was a man to whom life meant so much and whose life was so valuable to others that the loss is immeasurable. The cause of library service, both in the state and nation, could not have suffered a greater blow . . . As a man, no less than as a librarian, Mr. Brett will be universally mourned.”
—Clyde W. Park 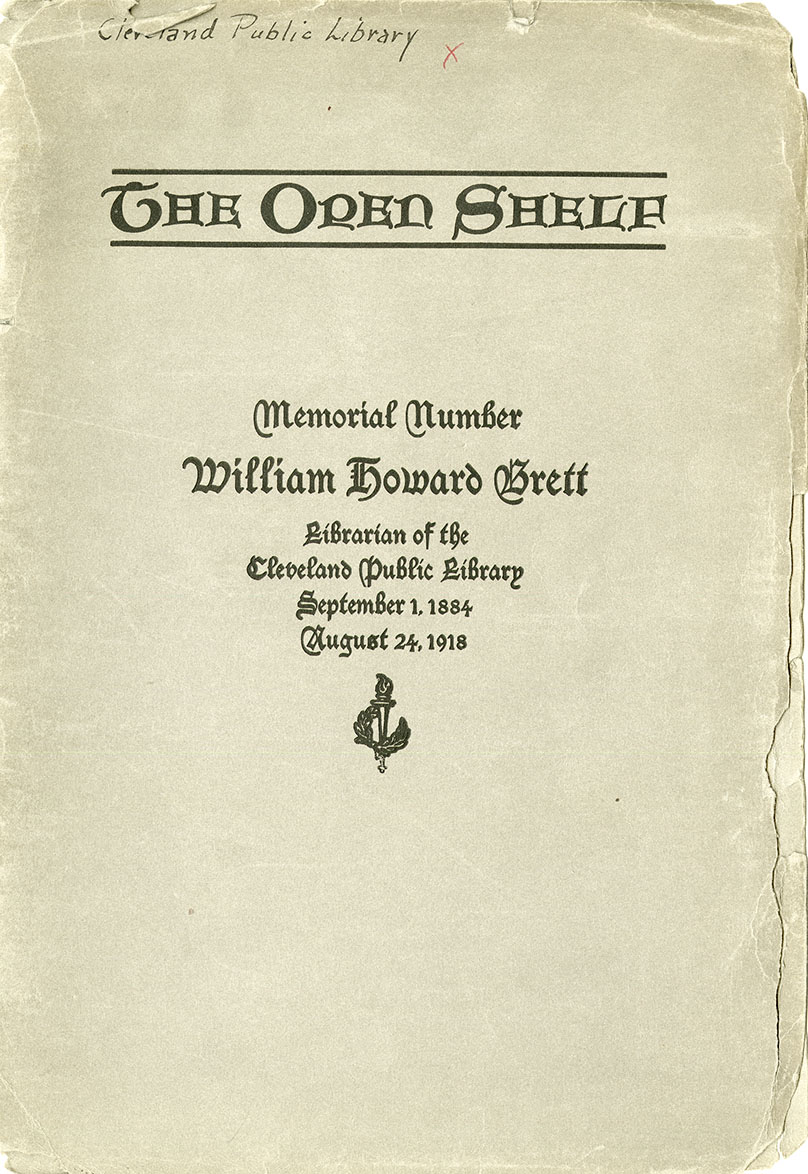 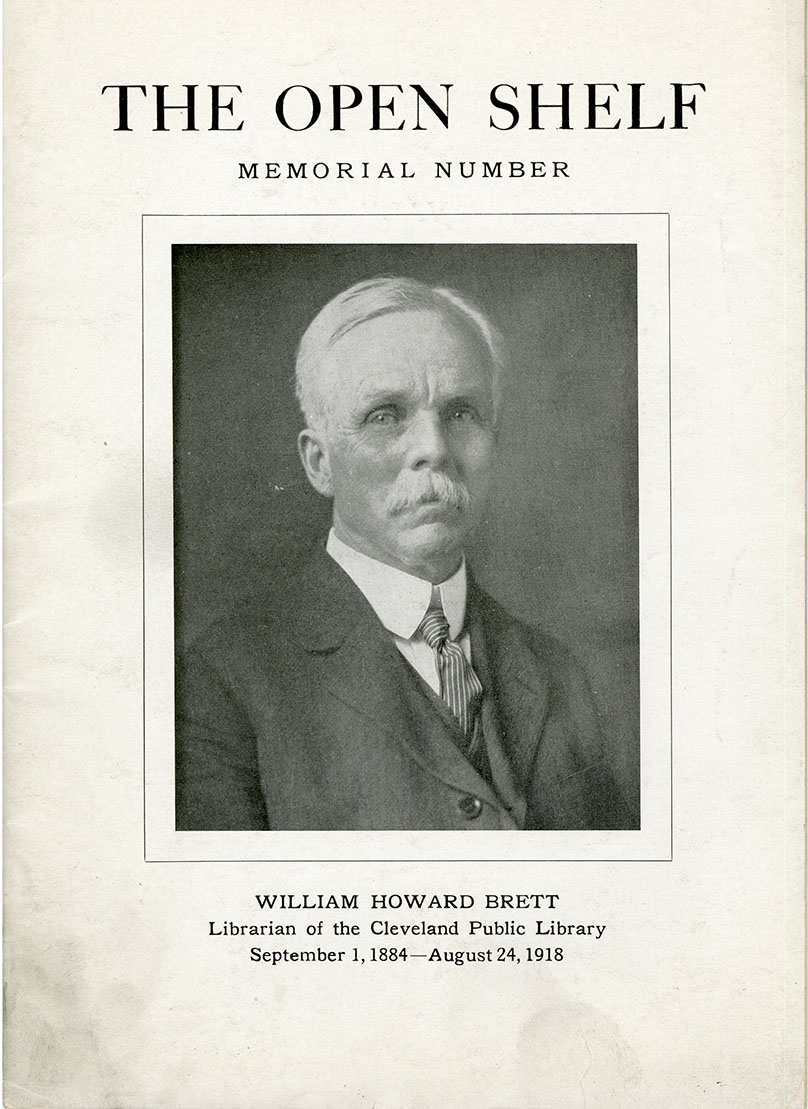 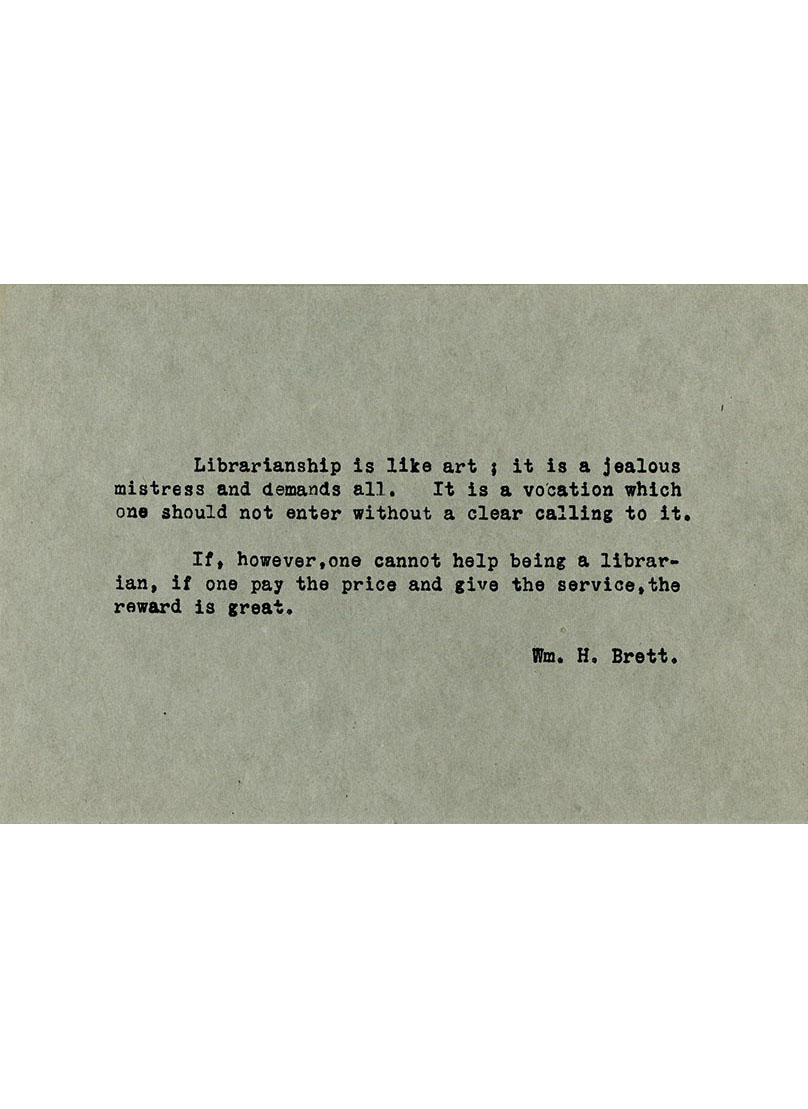 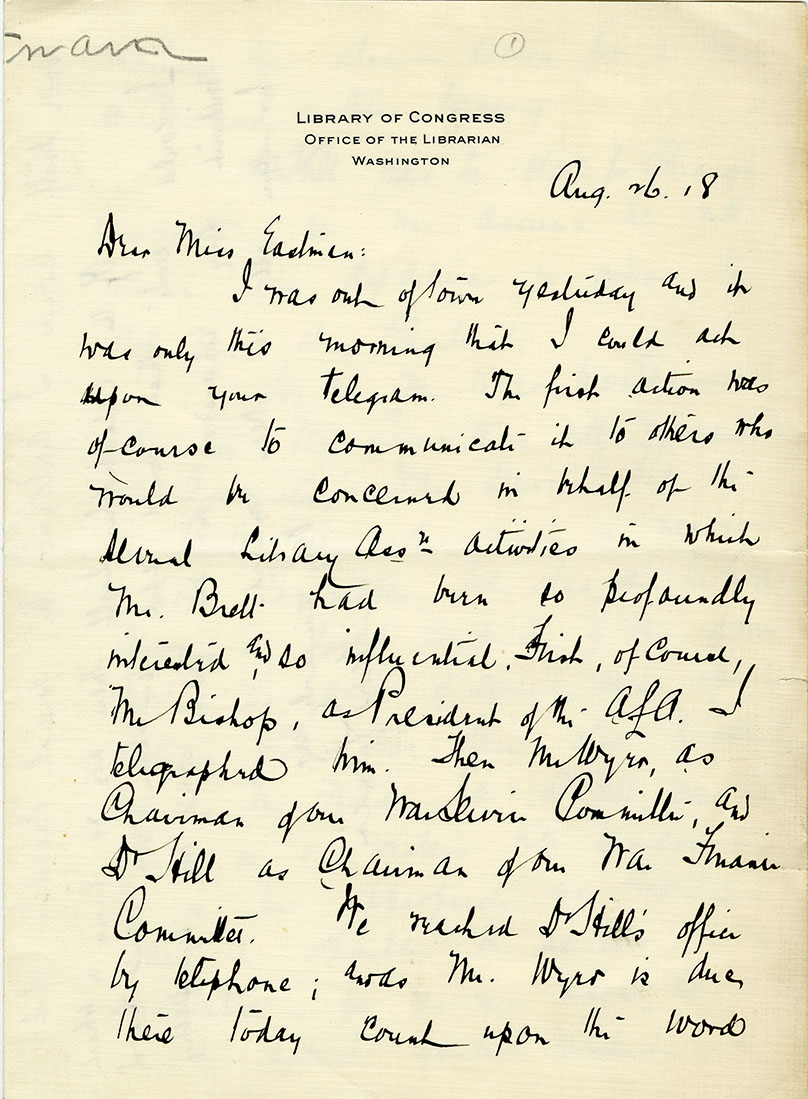 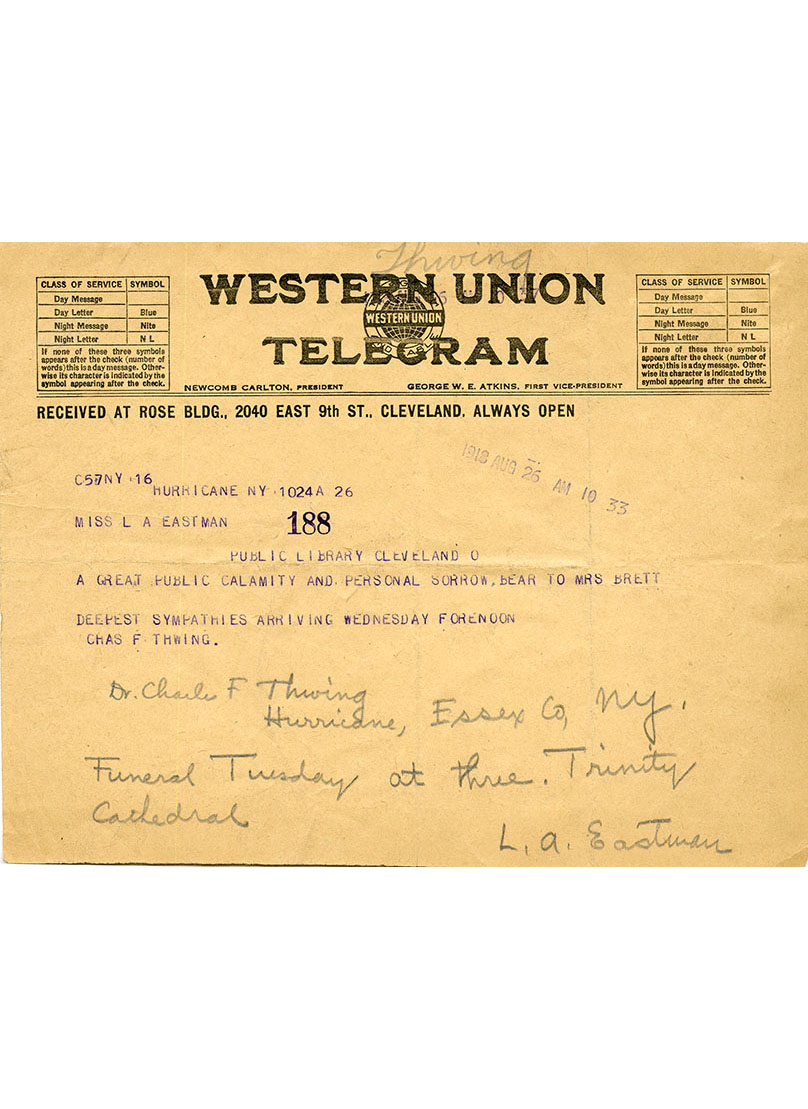 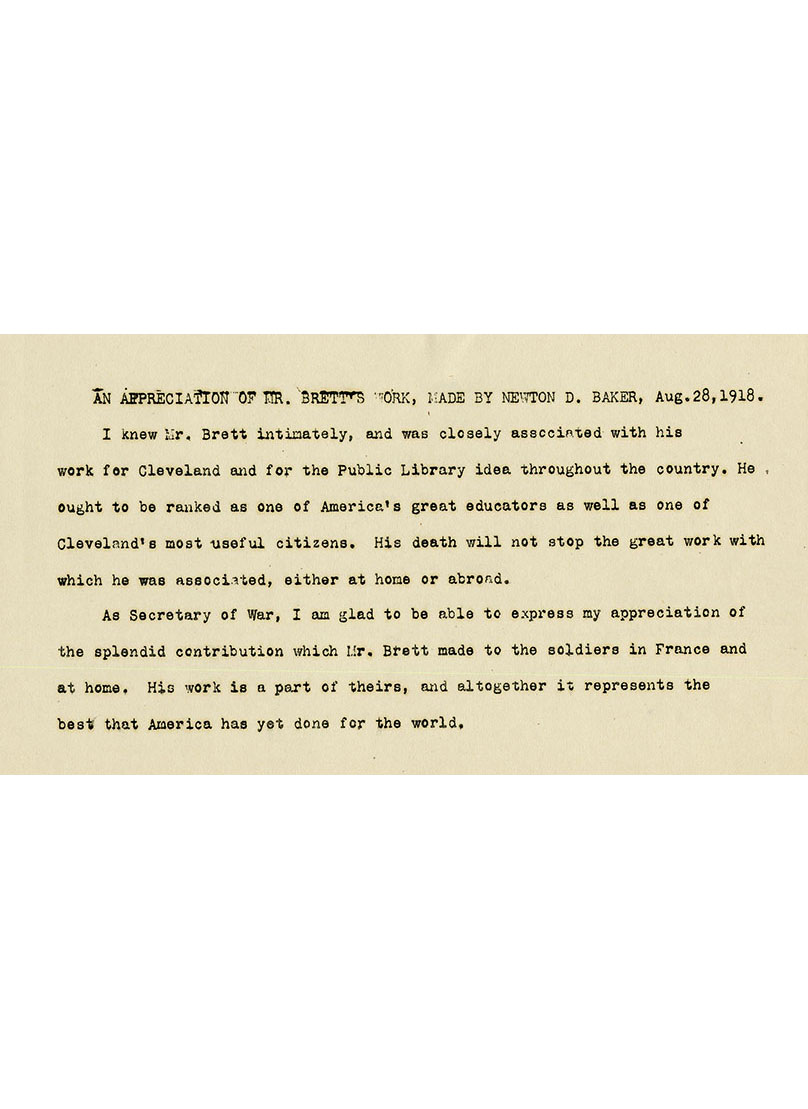 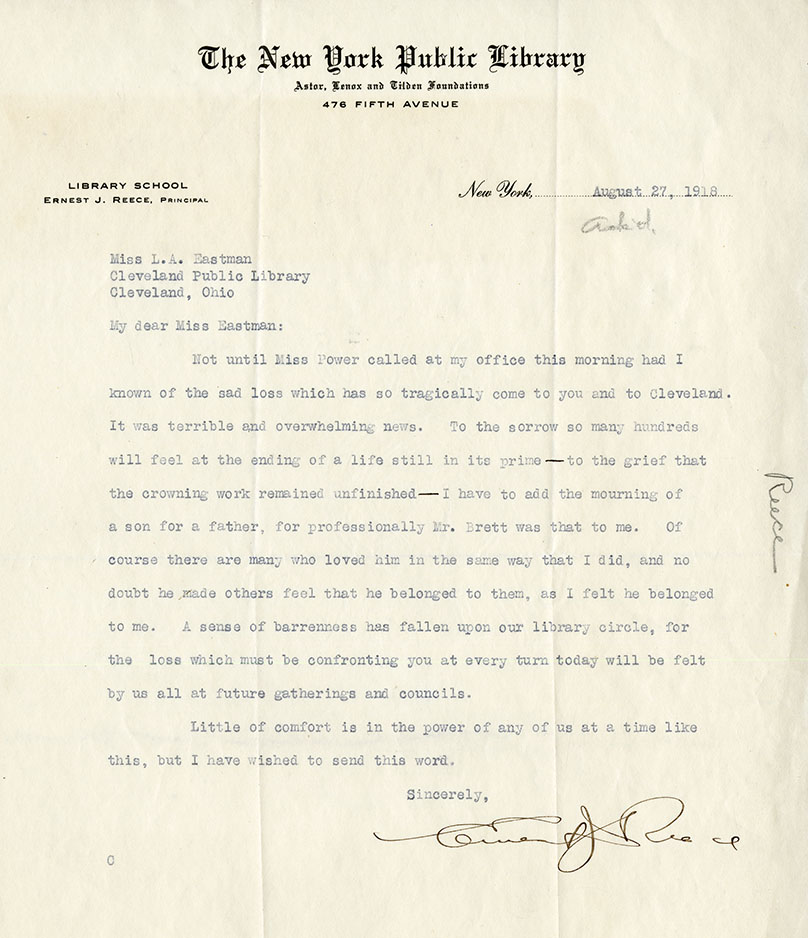