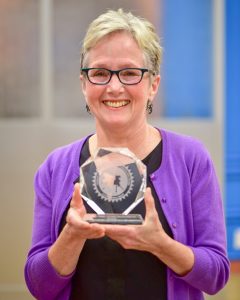 When Melissa Sweet accepted the 2018 Sugarman Award at a special ceremony at Cleveland Public Library on September 20, she held it up and said, “This award reminds me of icicles coming off my house in Maine.” It was just the sort of image one might expect from the author of a children’s biography about E.B. White—it celebrates the beauty of language while conjuring a specific place.

Prior to the ceremony, Sweet, who received the Norman A. Sugarman Children’s Biography Award for Some Writer! The Story of E.B. White, shared some advice for aspiring writers. Read on for Sweet’s thoughts on writing, revision, research, living an artist’s life, and more.

The Fate of an Artist

“No one could have ever told me this would be my fate,” Sweet said. She was referring to authoring a book like Some Writer!—a book not only filled with beautiful images, but one that required painstaking research.

Throughout much of Sweet’s career, she worked primarily as an illustrator, with her work gracing more than 100 children’s books. Only in the last decade has she turned to writing books as well as illustrating them. (“As an author, I’m only about ten years old,” she informed the audience during the award ceremony.) As both the author and illustrator of Some Writer!, she is perhaps most proud of the back matter in the book—the research and the original source material that formed the foundation for crafting the true story of E.B. White’s life.

“I had never done anything so big, with so much material,” she said of the work required to bring Some Writer! to life. “I was teaching myself as I went along.”

Fortunately, Sweet had the help of Martha White, E.B. White’s granddaughter, who happens to live in the same Maine town as Sweet. When White learned Sweet hoped to write a biography of her grandfather, she provided home videos, photo albums, letters, and other personal effects to aid in the research process.

“She gave me carte blanche and trusted me,” Sweet said. In addition to the sources Martha White provided, Sweet also visited E.B. White’s alma mater, Cornell University, as well as his farm in Maine. She advises other writers to dive into the research and leave no stone unturned.

“You never know what you’re going to want to use, so you want to see everything,” she explained. “And I decided that what interests me most will likely interest the reader, too. The kind of information that humanizes [the biography subject], how we can see ourselves in them, how they’re just like us—that’s what we want to read about.”

Sweet describes E.B. White’s writing as fluid, accessible, memorable, and timeless. If she had to boil down the essence of E.B. White as a writer, she said one word comes to mind: freedom.

“He had a conviction—he wanted to write what he wanted, as he pleased,” Sweet said. “He wrote for The New Yorker, but the fame and notoriety of New York and The New Yorker were not for him. He wanted to live on a farm in Maine and write as he pleased. That life gave him the time and space to think—he might think about an essay while shingling the roof, or while shearing a sheep.”

Constructing one’s life in a way that invites creation is something Sweet considers important for all writers and artists.

“Where we live and how we live contributes to the work that we do,” she stressed. “For E.B. White, by taking himself to a place that inspired him, he could do the work he believed in.”

During the award ceremony, when a child in the audience asked Sweet if she ever “messes up” while working on a book, Sweet didn’t hesitate.

“All the time,” she said. “Every day is a prototype for the next day. The fun part of the creative work is the actual work. The fun is figuring it out and getting better at it.”

Sweet urges other writers to follow their convictions when it comes to artistic pursuits, and to remember the true joy of creative work can be found in the process, not the aftermath.

“I try hard not to think about how the work will be received, and definitely not how it will be acknowledged,” she said. “The reward in being a writer or artist—and I mean this sincerely—is the ability to go to the studio every day.”

Sweet added that she tries to write as E.B. White did, “for an audience of one.” She believes writers should pursue what most interests them, to not be intimidated by any topic, and to follow the ideas that refuse to be pushed aside. When she first thought of writing a biography of E.B. White, for example, she knew right away she had something special.

“The idea had me as much as I had the idea,” she said. “Ideas are easy to come by, but it’s the one that hits you on the head—that’s when you know it’s a keeper, when you can’t imagine not working on it.”

Now that Some Writer! is out in the world, readers and critics alike are celebrating the book for its portrayal of White and its artful presentation. Sweet loves to hear that some readers now feel they know E.B. White, or when others return to some of White’s classic books, like Charlotte’s Web or Stuart Little. Most of all, she hopes readers will explore the source material in the back of the book—the type of research that helped her win the Sugarman Award in the first place.

“It is a thrill and an honor to receive the Sugarman Award,” Sweet said. “By giving me this award, you give me the courage to go on, to take risks, and to continue writing for an audience of one. Thank you.”