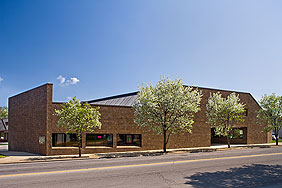 Originally located on the corner of Pearl and Devonshire, the first site for the South Brooklyn Branch was built with Carnegie funds and belonged to the independent South Brooklyn Village. When the village annexed to Cleveland, the building was turned over to the Cleveland Library Board. In 1936, a former bank building was bought, remodeled, and expanded to house the branch.

In 1979, Cleveland Public Library opened a new 10,200-square-foot building designed by Fred Toguchi Associates. The architect used the natural contours of the site to define the interior areas with gradual floor level variations. The interior areas were designed to be intimate in scale and lit by skylights. Exposed, painted mechanical ductwork was considered a modern design element.