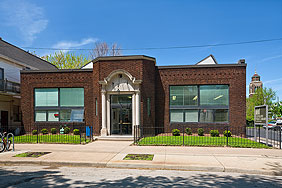 The Jefferson Branch is located in the heart of the Tremont neighborhood. Jefferson offers free wifi, public computers with Internet access, and a cell phone charging station. Printing, copying, scanning, and faxing services are available for a fee. Free parking is available in the lot next to the library, and a meeting room can seat up to 50 people in classroom style. Jefferson’s book drop is open 24 hours.

Throughout its earlier history, Cleveland Public Library constructed some branch libraries in buildings that could be adapted into a store or business. These branches were located in neighborhoods where the population and library service needs fluctuated. Jefferson is an example of a convertible-type building as evidenced by the plain brick, its factory-type skylights, and the fact that it is semi-fireproof.

Renowned Cleveland architect and artist Ora Coltman worked for Cleveland Public Library as a supervising architect and building inspector who oversaw the construction of three branch libraries, including Jefferson. In 1918, Jefferson opened its doors in the neighborhood of Tremont. The 6,900-square-foot branch was updated in 1981.