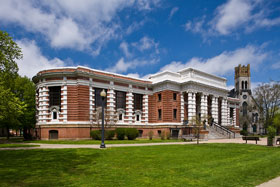 The Carnegie West Branch is located in the heart of Ohio City in Frank Novak Park. Thanks to a unique relationship with the City of Cleveland, Carnegie West is positioned within the grounds of this city park to better serve patrons in the thriving Ohio City community. Carnegie West may be accessed by RTA bus routes 79 and 79A, as well as the W. 25th–Ohio City Rapid Station. The branch does not have a dedicated parking lot, but free, on-street parking is available.

At 25,000 square feet, Carnegie West is Cleveland Public Library’s largest branch. Carnegie West opened in 1910 and was designed by Edward Tilton, the architect who designed four buildings for the U.S. Immigration Station on Ellis Island in New York. Carnegie West’s architecture can be described as modified Renaissance with elements of classical style. The building’s materials of brick, limestone, and terracotta provide a contrast of texture and color. Carnegie West was completely remodeled in 1979.