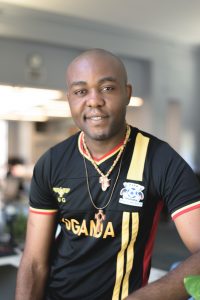 When Mayele Ngemba left Africa to come to the United States in 2011, he was eighteen years old and determined to build a new life Cleveland. A mere five years later, he set out to use his newly acquired skills to assist other refugees in the area.

“Coming in as a refugee is tough,” he says. “That’s why I decided to try to help others.”

Originally from the Democratic Republic of the Congo, Ngemba and his family arrived in Cleveland by way of Uganda, where they’d fled in 2006 to escape attacks in their home country. Ngemba enrolled in Lincoln-West High School and graduated in 2013. He went on to earn an associate’s degree at Cuyahoga Community College and is now studying political science and urban studies at Cleveland State University.

But Ngemba wasn’t satisfied with furthering his own education. In 2016, he set out to help other refugees in Cleveland by founding Advocates 4 Peace and Change, an organization that strives to assist refugees, particularly those from African and Arab countries who settled on the west side of Cleveland. Cleveland Public Library offered Ngemba the use of the meeting room at the Lorain Branch, which is centrally located for many members of this refugee population.

The refugee group meets roughly once a week for informal learning activities and games led by volunteers from Middleburg Heights Community United Church of Christ. Attendees receive help with English, math, science, and the process of adjusting to a new country and culture. Ngemba has organized larger programs, as well, such as a special event celebrating International Women’s Day and a trip to Washington, DC. Finally, Advocates 4 Peace and Change introduces refugees to the concept of public libraries.

“We don’t have public libraries like this in Africa,” Ngemba explains. “It’s a surprise for refugees—now they can use a computer, have a place to go to, have a place to meet and interact. I would encourage everyone to take advantage of the library’s resources. Not just refugees, but Americans who live here, too.” 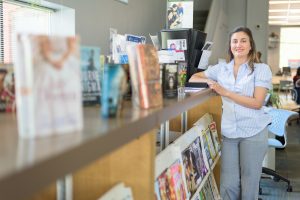 “I hope this program shows that our libraries are open to all, including those new to America,” she says. “Our library can serve as a safe location for refugees and others to make friends, create communities and access resources like books and DVDs. We offer a comfortable, warm place to become acclimated to America.”

“America is a busy country,” Ngemba adds. “Sometimes [refugees] don’t see each other or leave their homes often. Coming to the library to play and interact can help bring back memories of home.”

That sense of familiarity and camaraderie is part of what makes Advocates 4 Peace and Change so successful—and why it matters that Cleveland Public Library provides the meeting space.

“Hosting the meetings at the Lorain Branch is convenient—we have access to books, resources, everything we need,” Ngemba says. “I’ve been offered other meeting spaces, but I want to stay at the library. We feel at home here.”