Home Cleveland for Good Learning at Cleveland Public Library: Then and Now

Learning at Cleveland Public Library: Then and Now 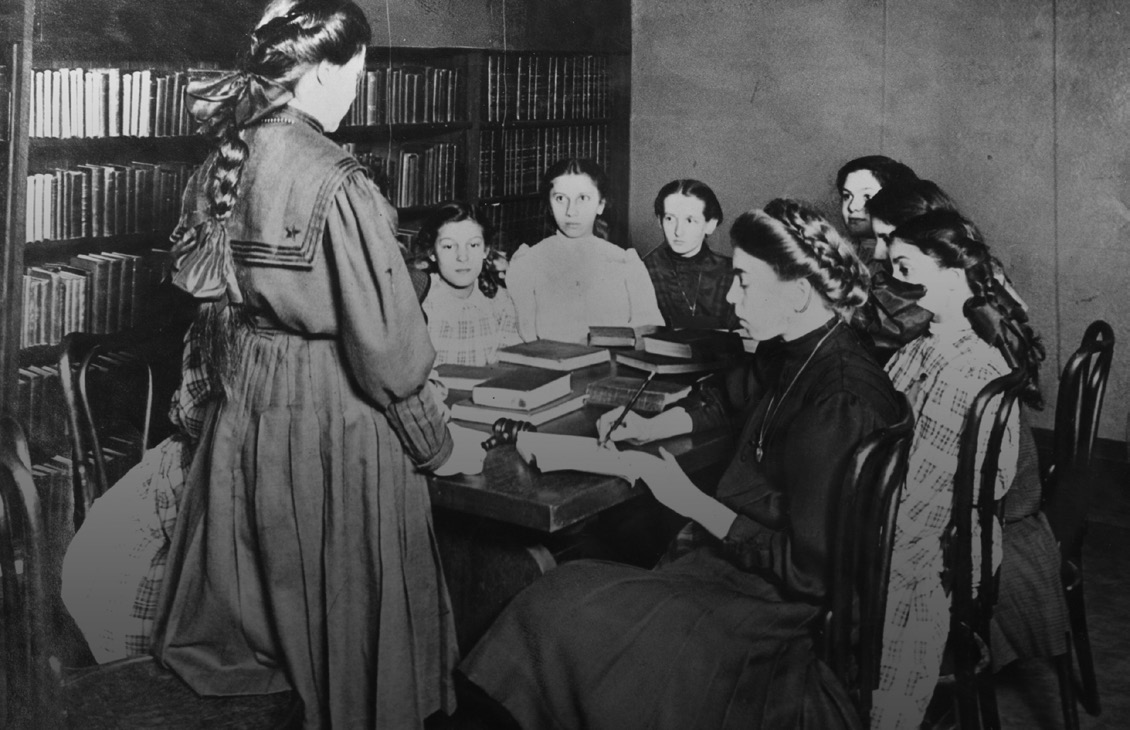 The Elizabeth Club at Woodland Branch, 1909

Imagine visiting a library branch without the ability to use public computers, wifi, the digital catalogue, or other online resources.

On a broader scale, imagine setting out to learn something new in a world without websites, smartphones, streaming video, social media, or any number of today’s lightning-fast methods of communication. That was the world library patrons lived in back in 1905—and yet Cleveland Public Library brought world-class learning to the city regardless.

William Howard Brett, the renowned librarian who served as the Library’s Director from 1884 to 1918, created a lecture series in the early twentieth century. (Other public libraries, including Detroit Public Library and Akron Public Library, also had lecture series during this time period.) Thanks to Brett’s vision, the series launched in 1905 at the Woodland Branch but eventually expanded to include the (former) Broadway, Miles Park, and St. 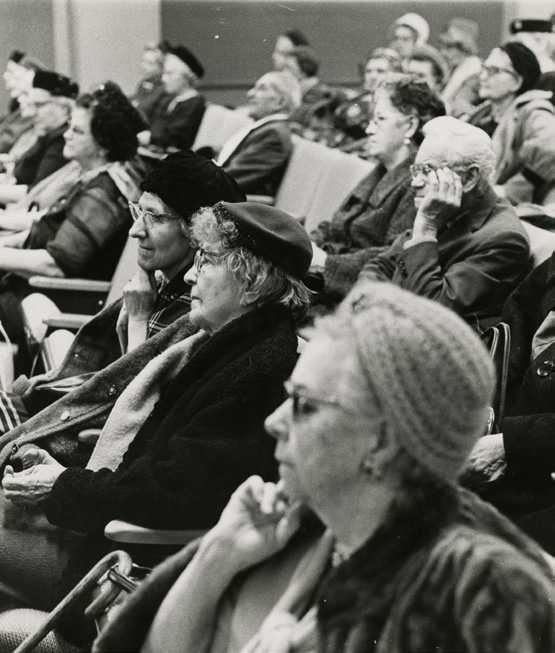 Clair Branches and, later, Carnegie West. Brett secured University of Chicago professors as speakers; these professors traveled weekly to Ohio to lecture at Toledo Public Library on Mondays and in Cleveland on Tuesdays.

According to the Cleveland Public Library Archives, lecturers were also secured from speakers’ bureaus and other universities.

In addition to academics and professionals, speakers included “world travelers, heads of social agencies, ministers, and musicians.” Lecture topics were eclectic and wide-ranging, with some subjects including the art of storytelling; travels through Japan, the Panama Canal, Egypt, and the Nile; life in the U.S. Navy; Modern Greece; the gold mines and glaciers of Alaska; and more.

Concerts performed by orchestras and ensembles were also included in the lecture series.

Lectures were well-attended, often attracting hundreds of attendees, and their diverse subjects could satisfy nearly any academic or recreational curiosity. Considering that international travel warranted more time, expense, and planning in the early 1900s than it does today, these lectures helped open new worlds for Clevelanders.

Ultimately, a succession of local, national, and international events in 1917 and 1918—including the nation’s entry into World War I, coal and fuel shortages, the Spanish influenza, and the untimely death of William Howard Brett—brought the lecture series to an end. Although the lecture series as it was conceived was no longer active by 1919, it stands as an early example of Cleveland Public Library’s commitment to continued learning.

Today, Cleveland Public Library is known as The People’s University, “the center of learning for a diverse and inclusive community”—an identity forged in the Library’s earlier years, extending back to Brett’s prestigious lecture series and commitment to bringing free educational opportunities to the public.

For the children who visited Cleveland Public Library a century ago, many of today’s offerings—such as coding classes, robotics camps, digital media instruction, and eSports tournaments— would sound like pure science fiction. But while the Library’s programming content may have evolved over the last hundred years, our mission to provide educational offerings to youth remains unchanged.

In the Library’s earlier years, school clubs served an important role in bringing children together to learn, socialize, and have fun. 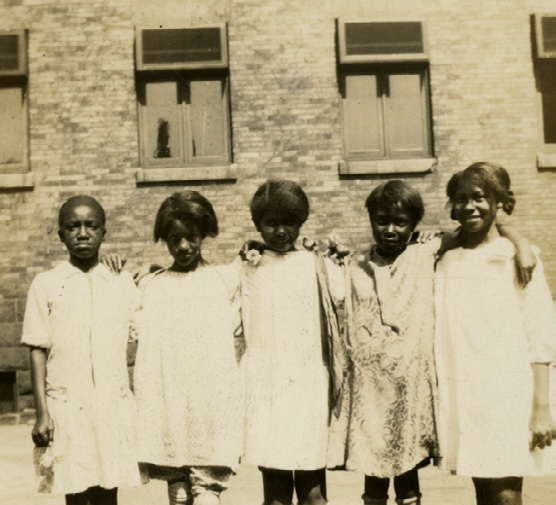 Branch reports indicate the first clubs were organized at South Side Branch. It was the Woodland Branch, however, that emerged as the most active branch library for children’s clubs. In 1907, eleven clubs—six girls’ clubs and five boys’ clubs—met weekly at Woodland.

School clubs focused on drama, debate, nature, stamp collecting, gardening, poetry, aviation, knitting, music, sports, drawing, book discussions, and more, a range revealing children’s diverse interests at the time. Some club members put their energies behind greater causes, as well. The Alcott Club, which included girls ages 12 to 14, debated whether children should be prohibited from working in factories, and members also slated a portion of their dues to fund books for the blind.

The Library’s school clubs also reflected the changing technology of the times. If eSports events are among the Library’s most popular programming for youth today, kids and teens a century ago found their interest sparked by a popular innovation of the times: electricity. At Perkins Branch in 1911, the Sons of Edison Club members studied electricity, inventions, and inventors, and they even wrote to Thomas Edison himself to tell him about their club. (According to a 1911 report on reading clubs at the Library, Mr.

Edison delighted the boys by responding to their questions and wishing them success.) Other boys’ clubs at additional branches also turned their attention to electricity during this era.

School clubs thrived at the Library in the early decades of the twentieth century. The number of children participating in clubs Live Long and Like it Library Club 4 UpNext Fall 2018

swelled from 2,431 in 1907 to 40,094 in 1931. While membership began to decline in 1932 due to external factors, Cleveland Public Library remained a place for children to pursue education, friendship, and enrichment.

Today, that commitment can be seen in our Summer Lit League reading club; early literacy programming; an exceptional collection of books, music, and movies for children; and special events for youth. In the last year alone, children enjoyed trolley rides, met local wildlife, received hands-on STEM experience, and learned to play music, make comics, expand their imaginations, and so much more—and it’s all thanks to Library programming.

While Cleveland Public Library is known for its history of engaging children, that doesn’t mean library programming has neglected older adults. For decades in the mid-twentieth century, the Live Long and Like It Library Club provided patrons over the age of 65 with a multitude of cultural and educational offerings. At the time of the club’s founding in 1946, Cleveland Public Library was considered the nation’s first public library to offer a club specifically for older adults.

Fern Long, head of the Adult Education Department at Cleveland Public Library, and Clara Lucioli, head of the Judd Fund Division Service to Shut-Ins, helped found the Live Long and Like It Library Club along with Lucia Bing, a Cleveland Welfare Federation employee. Bing is credited with conceiving of a club for older adults, and she saw the Library as an ideal place to help make it a reality. 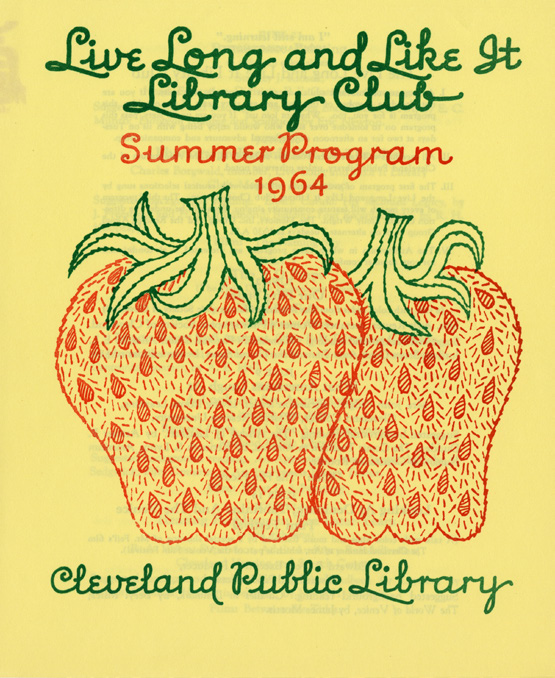 “[Mrs. Bing] believed that a library, with its less formal setting and atmosphere, would be a more inviting milieu for such an experiment than would a public school or conceivably a college,” Long wrote in a July 1968 Library Trends article. “Besides, no cost of any kind to the participant is involved in library programs, and this was, and is, an important factor to bear in mind when planning for the majority of the elderly.”

Live Long and Like It held its first meeting on November 12, 1946. A few dozen members attended that initial meeting, but the program grew rapidly. Within five years, the club boasted 673 members, and by 1958, 1,000 people were on the active member list, with about 200 members gathering weekly in the Library auditorium for meetings. The club continued to flourish throughout the sixties, seventies, and into the eighties.

In a 1948 Wilson Bulletin article, Long and Lucioli pointed out that the Live Long and Like It Library Club was not homogenous in nature. In fact, its membership represented “a complete social and economic cross-section of the community…There are men and women in it who live on old age pensions, there are a few who roll up to the library in chauffeur-driven automobiles, and there is every shade of prosperity in between those two extremes…it has been interesting to watch friendships form and develop.”

After many fruitful years, the club was transferred, per a Board of Library Trustees resolution, to the Older Adult Service and Information System (Oasis) on April 19, 1984. The Live Long and Like It Library Club may now be relegated to history, but Cleveland Public Library remains committed to serving older patrons. By offering programming at senior centers, Homebound and Mobile Services, as well as other social events and classes for seniors, Cleveland Public Library embodies the ideal that public libraries have a responsibility to offer educational opportunities to all who desire it, no matter their age.

The Future of Learning

On February 17, 2019, the Library will celebrate its 150th anniversary. As we approach this milestone and look to the future, we recognize that the Library’s tradition of offering free learning opportunities has greatly influenced the character of not only this institution, but the city at large. That’s because Cleveland Public Library is more than a place to check out books or use a computer.

Rather, it’s a public space that welcomes anyone who wishes to explore a budding interest, expand upon educational goals, or simply learn something new.

We’ve been here to help teach and inspire our community members for the last 150 years—and now it’s time to see where learning can take us in the decades to come.

The Cleveland Public Library Archives graciously provided the historical background information and images for this article. To see a slideshow of vintage Live Long and Like It Library Club programs, please visit the History page at cleforgood.cpl.org.