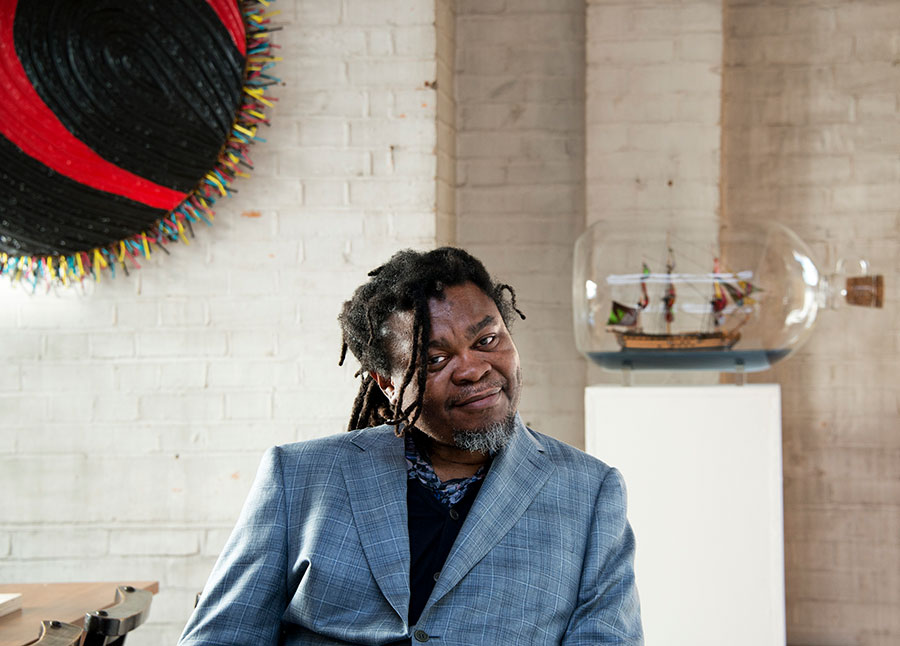 Commissioned for Cleveland in partnership with Cleveland Public Library, this installation by Yinka Shonibare MBE (RA) celebrates the richness that immigration brings to a nation. The American Library consists of approximately six thousand books displayed in open bookcases, each wrapped in colorful African wax cloth, a prominent feature of the artist’s work. Stamped in gold upon each spine is the name of a first- or second-generation immigrant to the United States who has contributed significantly to a particular field of art, science or American culture, or the name of an immigration dissenter who opposed such ideas. Open borders, freedom of speech and blended An American City Eleven Cultural Exercises heritage are all central themes to Shonibare’s work. This new project is a sequel to the artist’s 2014 installation, The British Library, dedicated to honoring immigrants to the United Kingdom who made similar contributions to British society. Cleveland Public Library staff will contribute the names and categories selected for inclusion in the project, which will be accompanied by a proprietary website providing information on all the names included in the bookcase. The website will serve as a portal for visitors, both virtual and on site, to upload their personal immigration stories. The work was made possible by funds from VIA Art Fund. 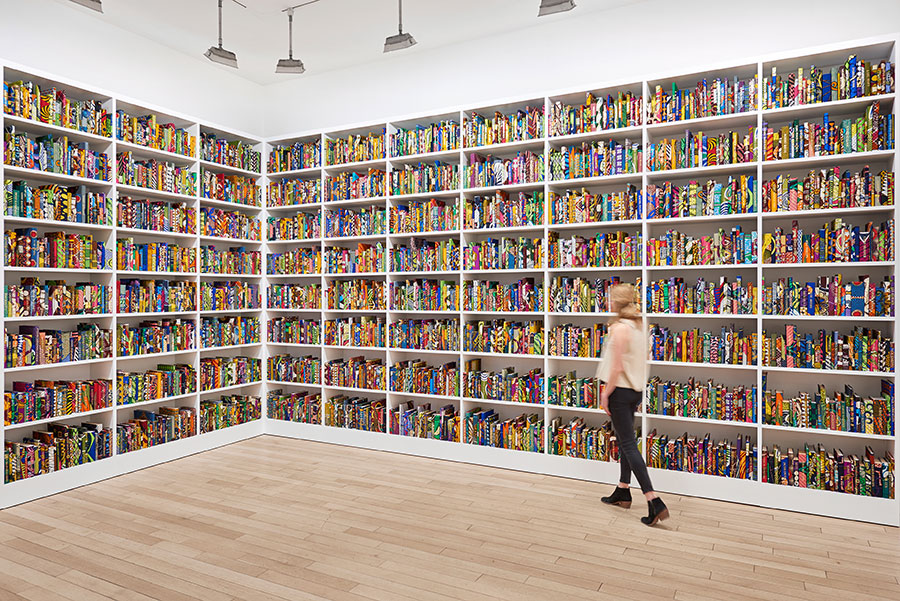 Yinka Shonibare was born in London, UK in 1962 and grew up in the UK and Lagos, Nigeria. He studied at the Byam Shaw School of Art, London in the 1980s and graduated from Goldsmiths College in 1991.

Over the past decade, he has become well known for his exploration of colonialism and post-colonialism within the contemporary context of globalization. Working in painting, sculpture, photography, film and installation, Shonibare’s work examines race, class and the construction of cultural identity through sharp political commentary of the tangled interrelationship between Africa and Europe and their respective economic and political histories.

In 2004, he was awarded the decoration of Member of the ‘Most Excellent Order of the British Empire’ (MBE) and was also nominated for the Turner Prize. He has participated in many international exhibitions including Documenta 11, Kassel in 2002 and the 52nd Venice Biennale in 2007. In September 2008, his major midcareer survey commenced at the MCA Sydney and then toured to the Brooklyn Museum, New York and the Museum of African Art at the Smithsonian Institution, Washington DC. His public art commission, Nelson’s Ship in a Bottle opened on the Fourth Plinth in Trafalgar Square in 2010. In 2013 he was nominated as a Royal Academician.

FRONT International: Cleveland Triennial for Contemporary Art is an exhibition comprised of artist commissions, performances, films, and public programs that will launch its inaugural edition in July of 2018. An American City: Eleven Cultural Exercises, in collaboration with museums, civic institutions, and alternative spaces across Cleveland, Akron and Oberlin, will showcase an ambitious roster of projects, including performance and theater throughout the landscape and built environment. With a roster of national, international and area-based artists at all points in their career, FRONT will examine the ever-changing and politically urgent conditions of an American city.

The American Library: Highlighting the Immigrant Experience through Art