The magic of puppetry comes to life at Cleveland Public Library when a special exhibit, The World of Puppets: From Stage to Screen, opens Saturday, March 23. The grand opening will feature puppet shows, workshops, and costumed characters, while related programming will continue throughout 2019—all to celebrate the Library’s 150th anniversary year.

“Puppetry is an art form with a rich and varied history that appeals to both children and adults,” says Melanie Guzmán McCarter, who works with the Library’s Outreach & Programming Services. “This exhibit celebrates that history while providing educational, hands-on opportunities for families. The Library has a long history of supporting the art of puppetry, and in our anniversary year, we’re excited to show why this art form is such a treasured part of our culture.”

The World of Puppets: From Stage to Screen features puppets from around the world, including antique puppets as well as modern-day popular characters from theater, film, and television. Exhibit visitors will encounter Oscar the Grouch from Sesame Street (for a limited time), Audrey II from Little Shop of Horrors, and Nutso and Shirley from Cleveland’s own Hickory Hideout, among many others. 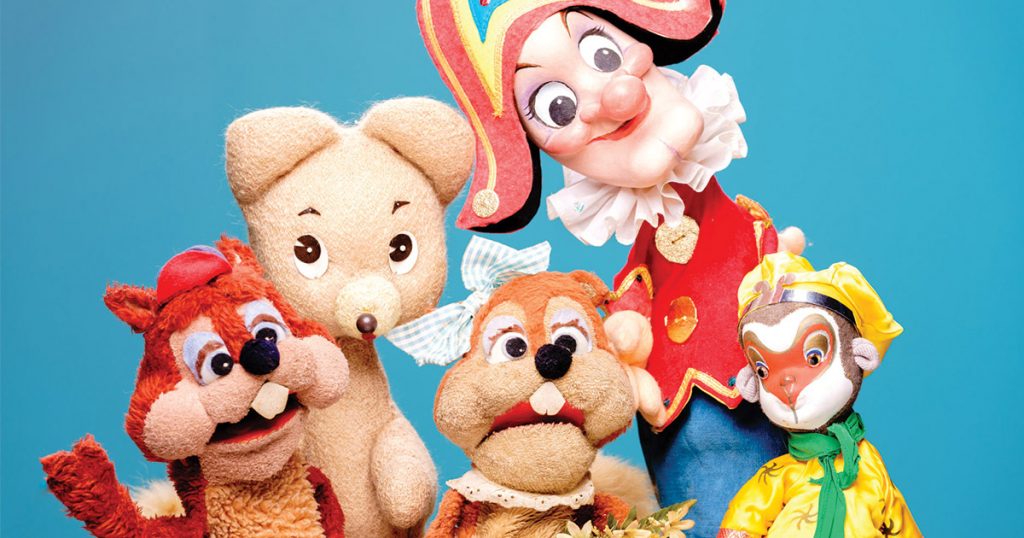 The March 23 opening day activities, which are presented in partnership with the Puppeteers Guild of Northeastern Ohio (PGNO) just days after the World Day of Puppetry on March 21, will include a Punch & Judy performance by Puppets With Pizazz; puppet crafts; performances of The Shoemaker and the Elf and Goldilocks and the Three Bears from Great Lakes National Puppet Theater; a craft talk focusing on puppet mechanics; The Frisch Marionettes’ performance of The Jungle Book; and character appearances from Sesame Street’s Walkaround Elmo.

Bradford Clark, Professor of Theatre & Film at Bowling Green State University, who curated The World of Puppets, describes puppetry as a multi-faceted art form. “Historically, puppets have offered political or social commentary, as Punch and Judy do, or they could be used for religious purposes,” he says. “Some forms of puppetry around the world are extraordinarily literary or complicated. Like music, dance, or theater, there’s such a range of what puppetry can be.”

This exhibit also celebrates Cleveland Public Library’s 150th anniversary by reflecting on the Library’s history of services to children and its longstanding mission to make public art and performance readily available to the community. Throughout 2019, the Library will expand the scope and accessibility of the puppetry arts in Northeast Ohio by integrating puppetry programming in its outreach and educational offerings.

The Library will offer a media preview of the exhibit on Thursday, March 21 from 3:00 p.m. to 5:00 p.m. On-hand to share information are Bradford Clark, exhibit curator; Aaron Mason and Melanie Guzmán McCarter, Outreach and Programming Services at Cleveland Public Library; Vincent J. Polowy, President of PGNO and Artistic Director of Great Lakes National Puppet Theater; and Robin Van Lear, Artistic Director of Community Arts for the Cleveland Museum of Art. Members of the media interested in attending this preview should contact Tana Peckham for more information.

Special preview events will also be held on Friday, March 22, when visiting school groups will view the exhibit during the day and, during the evening, invited guests will watch an on-stage conversation featuring the producer, host, and puppeteers who worked on Hickory Hideout, the celebrated children’s puppet show produced by WKYC-TV from 1981 to 1991. Al Wohl, one of the show’s directors, will moderate the panel discussion. Actress Kathryn Hahn, who made her first television appearance on Hickory Hideout, will provide a video greeting at the event.

The World of Puppets: From Stage to Screen runs March 23 through November 30, 2019 in Brett Hall on the first floor of Main Library, located at 325 Superior Avenue. This exhibit is made possible with the assistance of PGNO and the Cleveland Museum of Art, who serve as partner organizations.