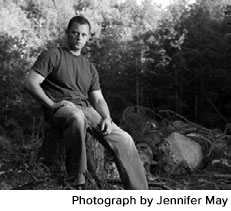 Percy will deliver his fiction craft talk, “How Do You Create Suspense? I’ll Tell You Later,” on Friday, August 3 from 7:00 p.m. – 9:00 p.m. in the Louis Stokes Wing Learning Commons. Percy, who authored the craft book Thrill Me: Essays on Fiction, will provide local writers (and anyone interested in crafting a tension-filled tale) with advice and guidance on the craft of writing suspenseful narratives.

On Saturday, August 4, Percy’s Writers & Readers appearance corresponds with Literary Cleveland’s free Inkubator conference. As the Inkubator headliner, Percy will give the keynote at 3:00 p.m. in the Louis Stokes Wing Auditorium. Cleveland writer Brad Ricca, the author of Super Boys and Mrs. Sherlock Holmes, among other books, will interview Percy during this event.

Benjamin Percy is celebrated for writing compelling narratives and for blending the conventions of genre with literary fiction. He is the author of the novels The Dark Net, The Dead Lands, Red Moon, and The Wilding, the story collections Refresh, Refresh and The Language of Elk, and the craft book Thrill Me: Essays on Fiction. His comics work includes DC Comics’ Nightwing, Green Arrow, Teen Titans, and a two-issue special as a guest writer for Batman Detective Comics #35 and #36.

The remainder of the 2018 Writers & Readers series will feature Paul Beatty on September 22, Antonio Vargas on October 13, and Susan Orlean on November 10.