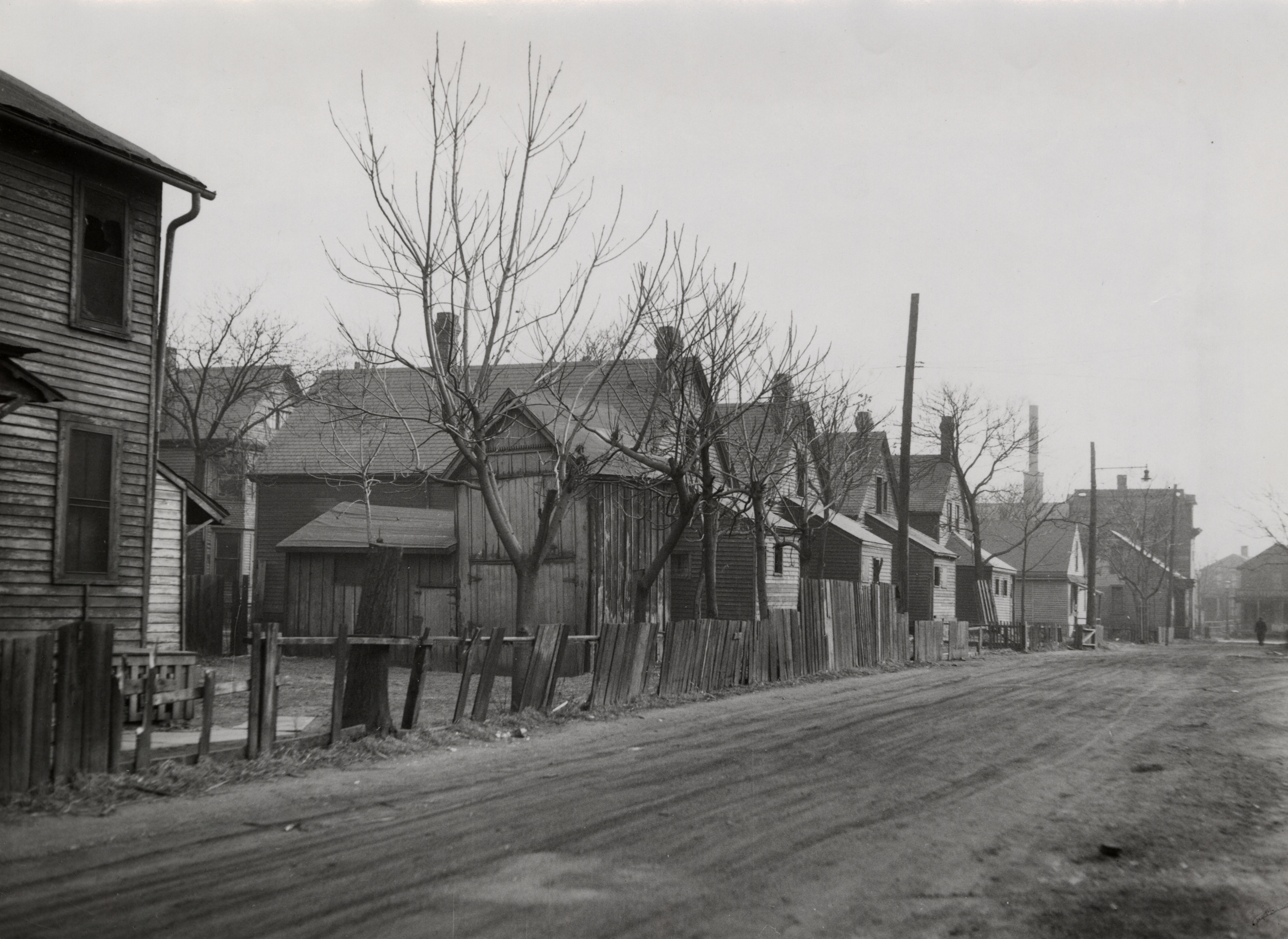 The photo above shows typical housing available in the Cedar-Central neighborhood around East 22nd Street before the area was cleared for public housing projects in 1935. (Photo Courtesy of Cleveland Public Library, Photograph Collection).

At the beginning of the 20th century, the United States experienced a momentous population shift that affected a number of northern cities, including Cleveland. The Great Migration rapidly increased the population of northern industrial cities like Cleveland, which attracted African American laborers in search of jobs who were trying to escape the racial violence and segregation of the South. Although the North was seen as a vehicle for upward mobility by former black southerners, new citizens of Cleveland soon discovered that racial segregation would persist in the North’s housing policies.

The largest influx of African Americans occurred between 1910 and 1930 during Cleveland’s industrial boom. A similar phenomenon was happening across the north in cities like Detroit, Chicago, Pittsburgh, and Philadelphia due to the expansion of the Pennsylvania Railroad and the construction of refineries and manufacturing industries at the time. This era was ripe for American industrialization. Fueled by the World War I manufacturing push, Cleveland and neighboring cities had a high demand for labor but were unprepared to house such a large incoming population of workers.

Because of proximity to industry and discriminatory housing policies, African Americans and ethnic white immigrants were often pushed into inner-city housing. Some of these discriminatory policies were masked by zoning ordinances. Deeds were not issues for land that was meant for integrated or African American housing, “housing covenants” were enacted in areas in order to prevent integration, and the HRA redlining all contributed to the racial segregation in the city of Cleveland.

Due to racist policies, African Americans were often pushed into slums, high-population areas that required families to sublet their housing, which contributed to the rapid decay of the structures. According to African Americans and the Color Line in Ohio, 1915-1930, options for African Americans were extremely limited because by 1914 housing had “a noticeable tendency toward inserting clauses in real estate deeds restricting the transfer of the property to colored people, Jews, and foreigners generally.”

Discriminatory zoning practices were so frequently used in the Cleveland area that one case, Village of Euclid, Ohio v. Ambler Realty Co., became a Supreme Court landmark case in 1926. A key issue in the case asked if zoning ordinances in effect violated the Fourteenth Amendment and equal protection of the laws. The Supreme Court ruled that the government had a vested interest in regulating land use and neighborhood composition. The verdict in part, stated, “Due Process involves a fundamental interest; if we are talking about equal protection, what would raise the level of scrutiny would be a law that inherently discriminates. You as the challenger, have to show there is no rational basis or governmental interest at stake.”