Basquiat: The Unknown Notebooks
On Exhibit at the Cleveland Museum of Art 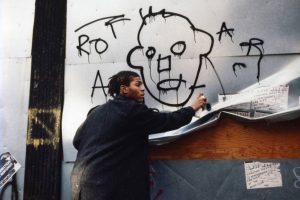 With no formal training, Jean-Michel Basquiat (1960–1988) succeeded in developing a new and expressive style to become one of the most influential artists in the postmodern revival of figurative painting during the 1980s. In a series of notebooks from the early to mid-1980s, Basquiat combined text and images reflecting his engagement with the countercultures of graffiti and hip-hop in New York City, as well as pop culture and world events. Filled with handwritten texts, poems, pictograms, and drawings, these notebooks reveal much about the artist’s creative process and the importance of the written word in his aesthetic. With over 150 notebook pages and numerous drawings and paintings, this important book––the first ever of the rarely seen notebooks––sheds new light on Basquiat’s career and his critical place in contemporary art history. ~ From the Cleveland Museum of Art Catalog 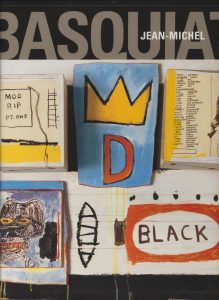 Learn more about Basquiat
The Fine Arts Department of Cleveland Public Library encourages you to explore the books we have to offer on this important artist. Study and see for yourself the dynamism of his work and life. His life and work have not been without controversy. Decide for yourself what position he holds in the history of modern expressionistic art.

“Having no art training, he never tried to deal with the real world through drawing; he could only scribble and jot, rehearsing his own stereotypes, his pictorial nouns for “face” or “body” over and over again. Consequently, though Basquiat’s images look quite vivid and sharp at first sight, and though from time to time he could bring off an intriguing passage of spiky marks or a brisk clash of blaring color, the work quickly settles into the visual monotony of arid overstyling. Its relentless fortissimo is wearisome.” ~  Robert Hughes , art critic 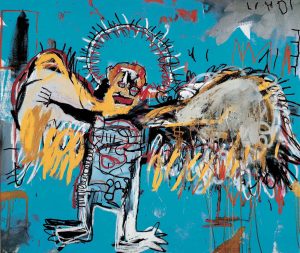 “Basquiat, who was closer to Snoop Doggy Dogg than Bach, was from a street tradition that is arrogant and confident enough that it doesn’t need to respond directly to any cultural tradition or set of rules. Jean, like the boxers he idolized, could knock you flat with one quick well placed jab. His drawings (often lists of words) are a sort of “Cliff Notes” from Hell for a Western Civilization class that has never been taught. Each word in each Basquiat painting or drawing pummels the Western Tradition into empty jargon. In Basquiat’s work, Roman emperors, Leonardo da Vinci, and Saturday morning cartoon characters are all footnotes in the same history. No wonder people, especially academics and critics, get touchy discussing Basquiat.”