Richard and Phyllis O’Connell met while working at Cleveland Public Library nearly 60 years ago, marking the early stages of a lifelong love affair with libraries—and each other.

When Richard O’Connell and Phyllis Dripan met as employees of Cleveland Public Library in the early 1960s, it wasn’t love at first sight. In fact, Phyllis was more focused on Richard’s strange snack of choice in the staff cafeteria (a lemon donut and a Pepsi) than she was on making a love connection. Even so, on June 16, 2019, Phyllis and Richard celebrated their 57th wedding anniversary—a long and happy marriage that all started at the Library.

The O’Connells, who now live in Northfield, recently returned to Cleveland Public Library for a visit. They strolled through the first floor of Main Library and reminisced about their time working in that very building. They also recalled their budding romance during those years, a courtship that culminated in Richard dropping an engagement ring into Phyllis’s lap in the employee lounge. (Today, the site of their engagement is an office in the Popular Library’s staff area.)

In the decades since, Phyllis and Richard have raised four children together and welcomed eight grandchildren into their family. They’ve also embarked on successful careers—Richard as a computer specialist and consultant, Phyllis as an early childhood education specialist and an adjunct professor of early childhood—but libraries and a love of books have remained a constant in their lives.

During their homecoming to Cleveland Public Library this summer, Richard and Phyllis O’Connell shared some memories from their time working and falling in love in Main Library all those years ago. 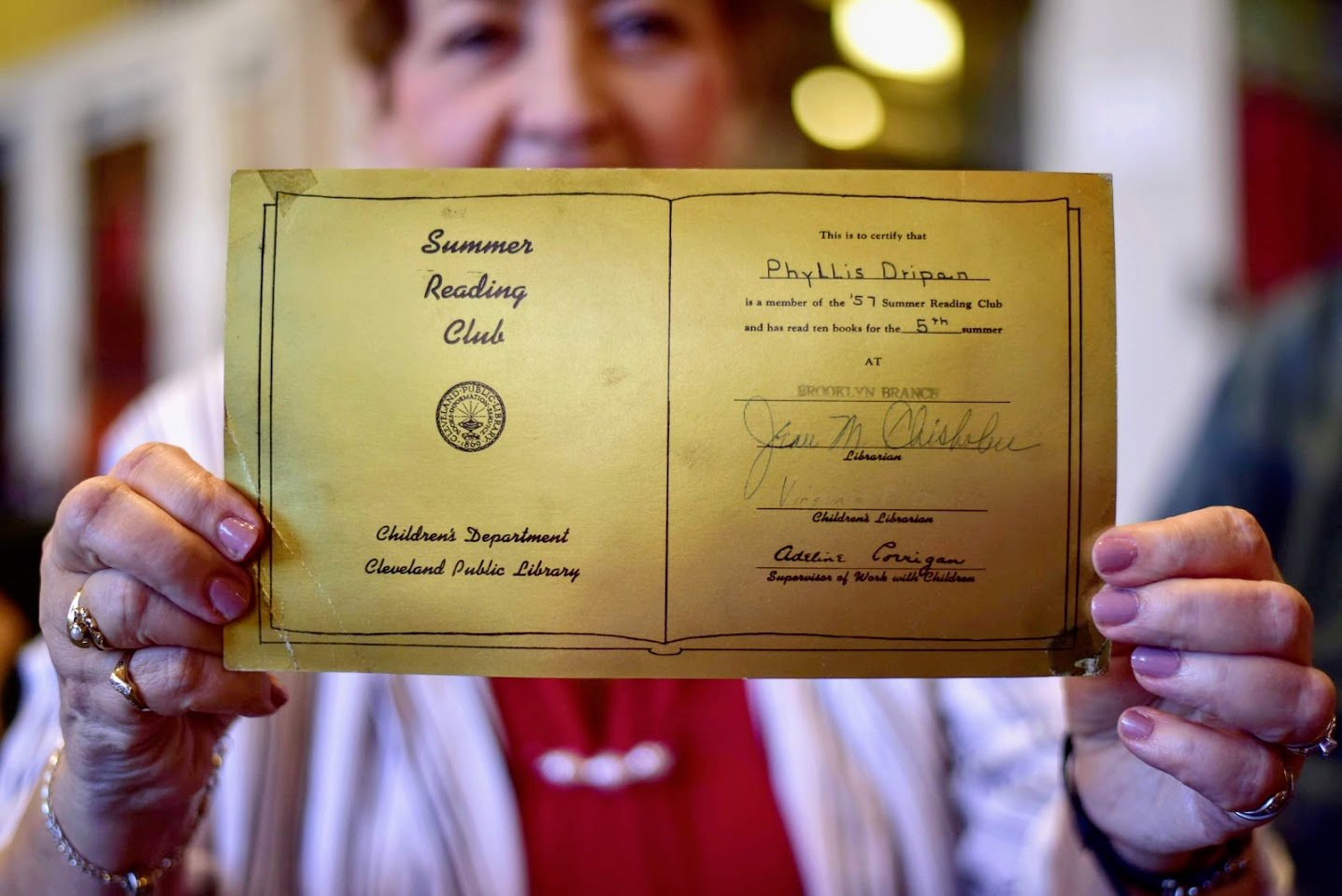 For Phyllis, a kinship with libraries began when she was a young child. As a loyal patron of the Library’s Brooklyn Branch, she read voraciously and completed the branch’s Summer Reading Club each year.

“As a kid, I didn’t play dolls,” Phyllis recalls. “I played library. All my books had pockets in the back.”

Brooklyn Branch was a perfect place for a young bibliophile like Phyllis. There, she found a place to read, discover new books, and even participate in themed Summer Reading Club celebrations—like the year she dressed up in a cowgirl hat for a “cowpoke fiesta” program. Phyllis so treasured these experiences that she saved the Summer Reading Club certificates and cards from her childhood, items she has since donated to the Library’s Archives.

“The library was always there,” she says. “Always.”

A love of books, reading, and libraries followed Phyllis into her teenage years. To her delight, she landed a job with Cleveland Public Library just as she was beginning her senior year of high school—she remembers dancing in joy when she received the call that the job was hers. She would go on to work in various departments during her tenure at the Library, including Fine Arts and Circulation.

“I loved working here,” she says. “I loved everything.”

Eventually, “everything” would come to include Richard O’Connell, who worked at the Library as a page.

Such a long and successful union might sound like a storybook romance, but Richard and Phyllis’s relationship endured a few bumps in the beginning. For their first date, Richard invited Phyllis to a hockey game; it was only upon their arrival in the parking lot that Phyllis admitted she hated hockey. But the real drama came when Richard gave Phyllis his class ring but then didn’t call her for the next ten days. He claims dating inexperience; she thought he wasn’t truly interested in pursuing her. This misunderstanding caused Phyllis to unceremoniously return his ring—after already having it resized to fit her own finger, that is.

Fortunately, the book-loving pair reconciled before long, and they embarked on a courtship marked by some endearing moments at the Library. Richard, for example, occasionally left a red rose on Phyllis’s book cart. He sometimes shelved Phyllis’s books for her, as well, to relieve her of the only work task she found boring. Otherwise, they maintained their professionalism at work. Mostly.

“The worst thing we did was kiss in the elevators,” Phyllis recalls. “That was daring back then.”

In the end, that resized class ring proved helpful because Richard already knew Phyllis’s ring size when he decided to propose. Phyllis didn’t hesitate in saying yes, and it seemed nothing could stop the couple from marrying—never mind that their parents thought they were too young. (Phyllis was 17 when they were engaged.) Regardless, their lifelong partnership had happily begun. Only weeks after their honeymoon, Richard was off to basic training for the Army Reserve before being stationed in Fort Knox and Fort Leonard Wood, with Phyllis joining him before long. Thirteen months after marrying, they welcomed their first child, a girl, who would be followed in the coming years by two boys and another girl.

While Cleveland Public Library no longer played a front-and-center role in Phyllis and Richard’s lives by this point, libraries still mattered greatly to both of them—and to their growing family. 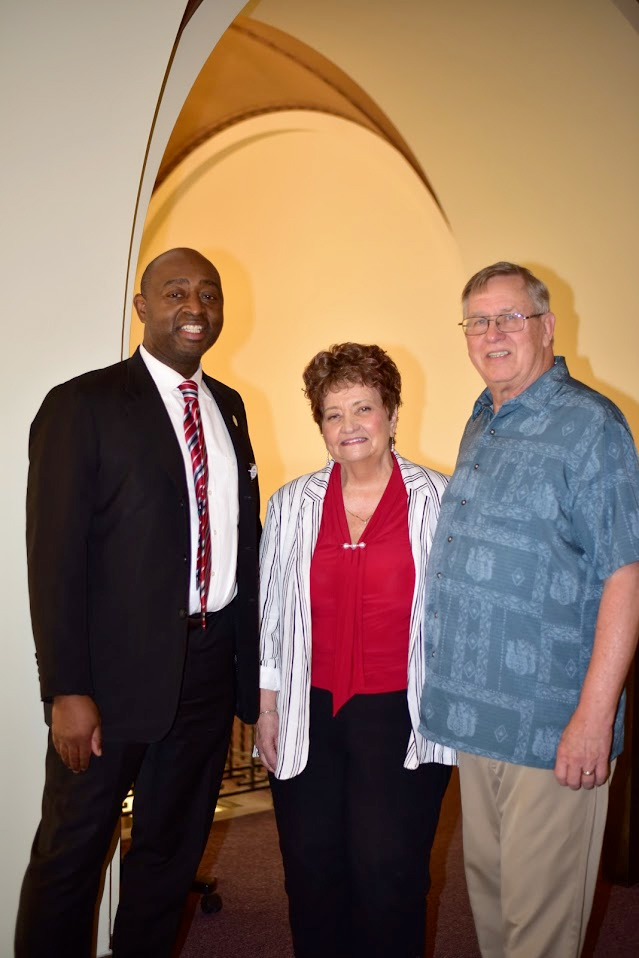 For Richard, who would go on to enjoy a long career in computers, working in the Technology Department of Cleveland Public Library in the 1960s provided a useful education.

“I was able to browse the books on technology,” he remembers. “The Library gave me a great foundation in what I ended up doing. I got into computers near the start, when no one knew much of anything about them.”

Phyllis has kept up with technology, too, as evidenced by her beloved Kindles, plural, which help her remain an active reader. She’s fond of mysteries and historical works, especially those focusing on the Civil War through World War II, as well as a variety of fiction. Richard is also an enthusiastic reader. He loves science fiction, and he celebrates the fact that books allow readers to explore their interests and “travel” to faraway places. And he and Phyllis both maintain a healthy appreciation for how libraries have changed over the years.

“Libraries have changed from an attitude of ‘Shush, be quiet and read’ to more of a community place,” notes Phyllis. “They have activities, snacks and toys for kids, and programs for a broad range of ages, from infants to senior citizens. Activities like that bring people in, and I’m all for it.”

While Richard and Phyllis embrace the ways libraries have evolved, they also retain fond memories from their time working in and using Cleveland Public Library. They reminisce about card catalogues, for example, marveling at how every book in the entire Library was represented by three separate cards. And during their visit this summer, they both praised the marble in the historic Main Library, as well as the twin staircases, the windows, and the lofty ceilings.

“The building is so gorgeous,” Phyllis says. “No matter how you move things around, it doesn’t change the bones of the building.”

In the end, both Phyllis and Richard agree that returning to the scene of their engagement was nothing less than a homecoming. In fact, they strolled the halls of Main Library as if they’d never left for other places and other adventures.

That kind of casual, comfortable approach is mirrored in the way Richard proposed to Phyllis in an employee lounge nearly 60 years prior. As Phyllis tells it, on that fateful day, Richard dropped a ring in her lap and said, simply, “See if this fits.”