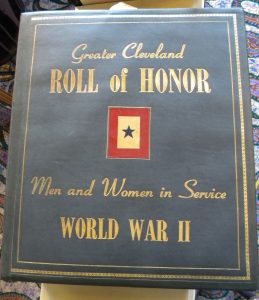 The Greater Cleveland Roll of Honor lists the names of many Cleveland area men and women who served during World War II. Since many were on active duty at the time, their wives, mothers, fathers, sisters, brothers or other family members would register the name of their loved one.  The Roll includes all branches of the U.S. military.  The book was dedicated on May 6, 1942 by  Louis B. Seltzer, editor of the Cleveland Press and Mayor Frank Lausche and given to the Cleveland Public Library to be permanently housed once the war ended.

Mayor Frank Lausche stated at the May 6, 1942 dedication:

“Let us do what honor demands. Every honorable toast carries with it its danger and its peril. With that honor, there shall daily be a peril and a danger. You shall not know, daily, when that message may come that your boy has given his life for the nation. I have been with you at the station, when you bid your sons good-bye. I have seen a father bravely suppressing his tears only to lean, when the train has gone, against the wall to regain his strength. It is better to die honorably than from starvation, better than being taken to the wall and shot to death for expressing one’s free opinion. It is American honor that is at stake, and America shall not allow it go undefended. In that book shall be compressed all the pathos, the joy and the pride that resides in the hearts of Cleveland. We shall see the firm and quick moving signature of the young wife whose husband has gone to war. And the mother’s hand, and the father’s.  We shall see compressed in that book the spirit of Cleveland – written in golden letters – symbolizing the Cleveland, the nation, that is to be.” 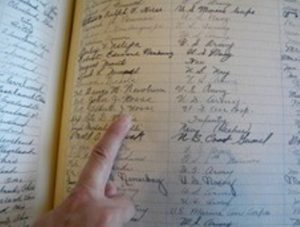 The Roll of Honor will be on public display honoring Veterans Day at the Cleveland Public Library, Special Collections Department from November 7-15, 2016 (the Library will be closed on November 11th )